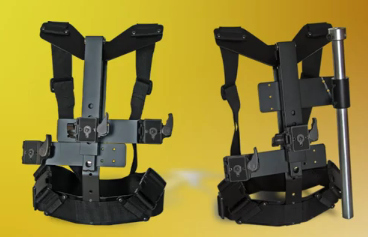 Thanks to Erik for a refresher about the Eboboo Body Mount Supporter. I've seen this little harness a few years back, but I'm not the type to wear something like this just to hold a camera. Silly idea? Well now that Cotton Carrier has finally created an adapter to support DSLR video (here), this 'Body Mount Supporter' idea (that was fetched long before DSLRs were doing video) doesn't look so far fetched anymore.

The Eboboo Body Mount Supporter is even offered with a hands free Umbrella holder should you need to shoot outdoors. Might be worth looking in to if you're on the same DIY path for some odd reason. Website found at Eboboo.com, and you can find information on the product and an entire 8 part series of videos over on YouTube here. [Thanks Erik] 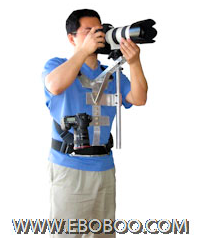 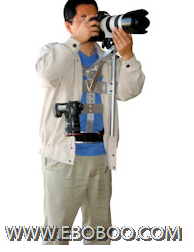 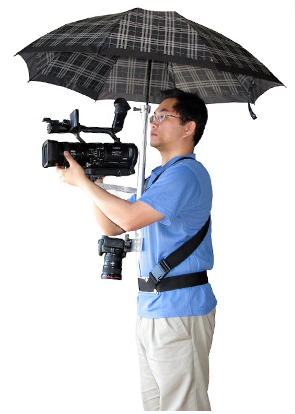 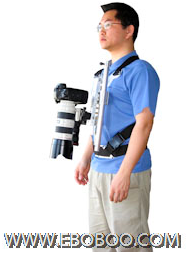 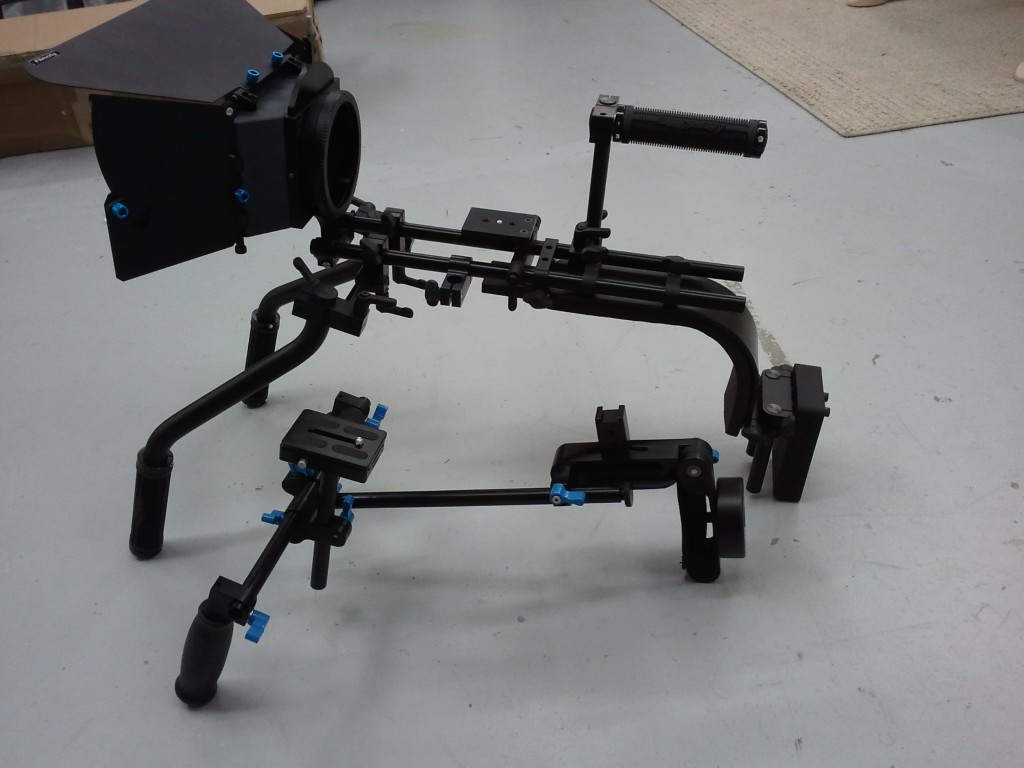 I forget who asked, but here's the size of the latest Fancier Mini Rig next to the Express35 Event Rig. You can see why a small micro four thirds or Sony NEX-5n / NEX-7 would look more at home on the smaller stabilizer. With some accessory clamps, it's possible to mount small accessories like a Zoom H1, Z96 LED light, and small Rode VideoMic Pro. Of course the minimal rods are not designed to expand into follow focus or matte box accessories. A better look at the Fancier can be found in an earlier article (here). As of now, I think the only place it's available is on Amazon (here). 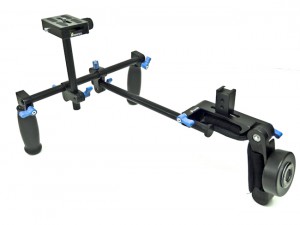 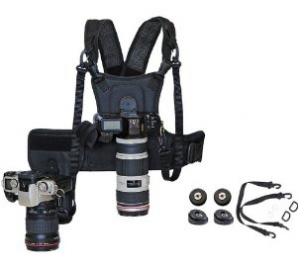 Cotton Carrier handles your DSLR like a BABYBJÖRN Baby Carrier

. Fitting as many of us consider our cameras as such. The Cotton Carrier Vest system has been around for quite some time as an option for photographers to carry their cameras 'hands free'. At some point Cotton figured these DSLRs shoot video and created an adapter to position the camera in front of the operator. It can also support a fluid head like the 701HDV. Looks like they are also rockin' a Varavon view finder as an example in one of the photos. 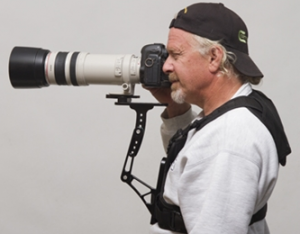 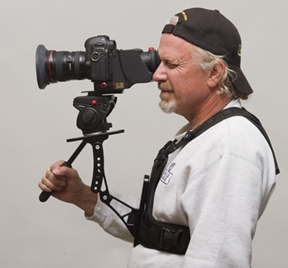 . Add in the very expensive MSRP price of the bracket for $259, and the combined solution to hold your camera hands-free may not fair well with the masses. 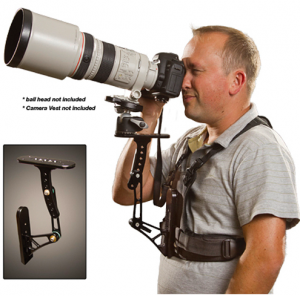 (Above) Video was just for fun, don't take it seriously

I've probably tested more stabilizers than the Brady Bunch Family has fingers and toes (combined). Not everything makes it on the blog, because it just ends up as wasted sapce. Now i'm not saying some of these stabilizers 'won't fly'. What I look into and weigh in on is Stabilizer vs. Price. With enough muddling around (a few days and a few modifications), you can probably get some decent shots with most stabilizers.

Since I just posted about questions on other Random stabilizers I don't think is worth the asking price, here's another one for you - not to consider. Besides looking quite odd, the current asking price is several times that of other stabilizers which are easier to fly and faster to balance. The handle has shock absorption, the stage can be positioned forward/back, and the weight can be shifted left/right. The odd color choice and design might have been based on old Buck Rogers technology. You would think the tripod stand base design would work well to sit your camera down, but it acts as a counterweight. If you are required to shift that weight to an angle, it will no longer sit as a tripod and just topple over.

The video demo was shot just for fun, and it was the first time out with it. It's definitely not easy to fly. I don't agree on the price tag running several hundreds of dollars while there are already existing units on the market that are much cheaper and already have proven results. If they dropped this down to about $80 dollars, it might be worth considering for those on a budget and a lack of aesthetic appeal. There is also a low mode version, and a kit that doubles as both low mode and tripod base mode found on eBay (click here).

Rigs are often compared to Lego systems, since they can be assembled according to your imagination. It's hard to justify the cost of industry standard 15mm rigs if all you need it for is to stabilize your camera. You can already do this with a few broomsticks and duct tape.

It starts to make more sense once you start to involve mounting audio accessories, lighting accessories, monitors, evf solutions, follow focuses, and matte boxes. Especially since some of those items require rails to mount. Clamps and rods also make it easy to redesign and customize size and shape depending on the individual. You can grow with a starter set of rails, or you can shrink down from a large rig. Not to mention the benefits to traveling. A large set of rods and clamps can be packed up pretty nicely. Lastly, there are many who just want the pure aesthetics of it.

Here's a video from Vimeo member Just Basl Productions showing how 90 degree clamps play a part in mounting accessories to your rig, or for redesigning your rig to accommodate different shooting styles. The RedRock Micro Spud can be used with any standard 15mm Clamp, and runs for just $8 dollars (click here).

Well Gini is definitely all ears and listening to feedback. Here's a look at a more complete Gini Follow Focus. All things black anodized, magnetic marking disc holders. Still lacks a pointer and packaged lens gear, but obviously something that anyone can add on. Shipping prices have also come back down from the $150+, so if you can score one for $1 dollar at auction that would still come out cheaper than anything else on the market. Find the Gini Stuff here. 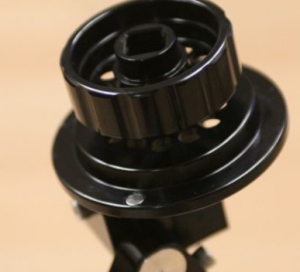 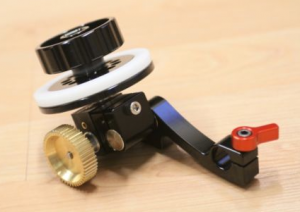 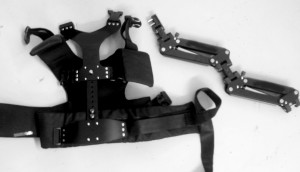 Testing out some new gear here. Purposely a very poor image with badges erased. The vest and arm are very impressive, but we'll see how the actual stabilizer performs. It's not a Steadicam or Glidecam brand name. Unless you can tell which one this is by the image, i'll have a review on this item up in time.. 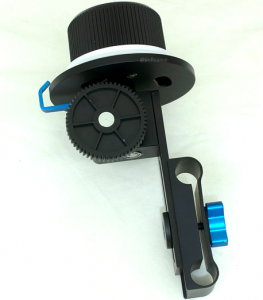 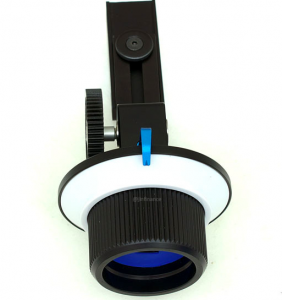 Thanks to a tip from Jarrod, here's a look at a very inexpensive DSLR Follow focus with universal lens gear. The R.J. Follow Focus states that it's made mostly out of Aluminum with a reversible gear to be used both left and right handed. There's a large marking disc area and standard knob to accept an external 'whip' if you decide to get one in the future. The gear sits low, so if you're using a small lens and a battery grip, you may have some trouble getting the FF to mate to the lens gear. The last question would be how much 'play' the follow focus has in the gear box, but at this price it can't be all bad. 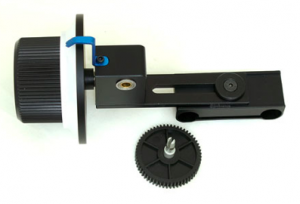 Like most follow focus systems, this one will require a set of 15mm rods to mount. If you don't have a set you're best bet is to take advantage of those Gini auctions. What you're looking for is a rig that has at least the DSLR base mount and two rails. 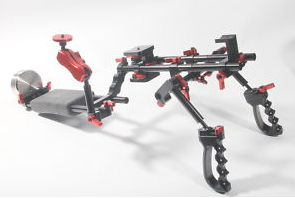