I was testing this about a week ago, but finally published it to the public. Taking all the same little electronics from the JuicedLink DIY slider project (continuous servo, servo driver, and battery case) the little Pico Flex dolly is moving on it's own. The speed is variable and with the size of the pulley. It can go really slow, but what you see is the fastest setting it will go. A piece of scrap acrylic plastic and double sided tape was all that was used to mount it temporarily while I try to figure out the cheapest and best way to drive this thing.

A rubber band pulley system didn't do so well. The band would stretch and when there was enough tension built up, it would snap back causing a jerking motion. The direct drive was the simplest way to turn the Pico wheels and was much more consistent. Using this technique could apply to all existing Pico Flex Dollies without replacing any existing parts. The servo is extremely strong and since the Pico moves with little effort, it can move quite a bit of weight.

YouTube Member dim3m has motorized the Pico Flex, and has also added lasers for an easy way to identify the rotating axis. This is a common practice used in those high end three wheel skater type dollies. By aligning the axles with the lasers, the cross path will be the center of rotation. This is where you need to focus your camera. Right now the lasers are just temporarily being held on with Friction arms as a proof of concept. [Thanks dim3m] You can find pen lasers fairly cheap these days in just about any store, but if you're lazy they can be found online for about $1.49 (click here)

A few people have already left links in the comments area that they have received their Pico Flex Dollies. They were supposed to begin shipping at a later date, and hopefully it was a surprise that many went out sooner. If you have one on order and haven't received it yet, be patient as they are still in the process of shipping. Above is a video review from Vimeo member Just Basl productions. [Thanks Jarrod].

Here's a simple unboxing (below) from Vimeo member Omar Torres to show what's included. The interior pouch of the bag is meant to hold the (optional) friction arm if you ordered one with.

His follow up video with a few tests. I have tons of fun with simple point and shoot cameras, but here Omar threw one of the largest DSLRs (Canon 5D Mark II), and one the heaviest lenses (Canon 24-70mm F/2.8L) onto the little Pico.

Right now PhotographyandCinema.com is awaiting the next inventory, so orders will re-open very soon. If you want to get notified when the pre-orders are open, you should subscribe to the form on the website (click here).

A quick update about the Pico Flex Dolly. The first batch of pre-orders have already been completely purchased and should begin shipping (estimated) September 12th. The website is still taking orders for the next batch that should ship about 5-7 days after the first batch.

Here's some important information. The wheels might be a bottleneck for production until the supplier can catch up. We were able to make another small volume batch order very quickly before they ran out. So as of now, there is a limited quantity of complete Pico Flex Dollies available in the second batch. They are moving pretty quickly, so consider getting an order in while it's there. We are also hoping to make International Orders available this week. Found at https://photographyandcinema.com.

It's bound to happen, so here's another version of a ready made rotating video dolly newly to the market. This one comes from the little known company Lensse. Obviously it does what other rotating dollies can do, but unless it's wider than what appears in the photos, the narrow stage doesn't seem like it's going to be practical for some type of a Fluid head mount. Hmm..might be good for tiny cameras and a mini fluid head? 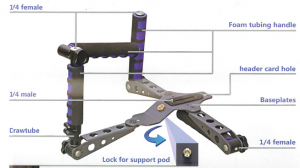 Next one (above) looks very similar to a DVTEC MultiRig Pro. If you're not familiar with what that is, you can find some Vimeo videos here: https://vimeo.com/search/videos/search:dvtec/e30032e7. It's a multi configuration type rig that can go from shoulder support to handheld. Doesn't look to have all the pieces of a true DVTEC, but it doesn't have all the price of one either. You should check out the link below to see all the different configurations this type of camera support can origami into.. 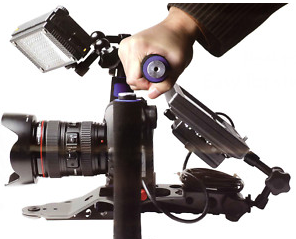 Next item (below) another Video Stabilizer based off of the Merlin, Hague, Lensse, IndieHardware design. Yeah I know right? Even clones can get cloned. Well to be fair, it looks closer to the IndieHardware over anything else. Love the write up in the auction about being 'The Secret Weapon" and "Latest Innovation". LOL. While the others are set on pricing, at least this starter is throwing out a few auctions.