The CAME-TV Boltzen Fresnel Snap Kit makes modifying the Boltzen 30w and 55w fresnels quick and simple. With the fast magnetic adapter you can modify the diffusion, color temp, or add RGB effects. The kit is currently on sale from $128 to just $68 US. So why would this be better than just buying a dedicated RGB LED Light?

Well while the world is becoming more obsessive with RGB LED Lighting, one of the small problems with having this feature built in is that the maximum power for the light can be greatly reduced. As a rough example a 60 watt daylight LED is obviously a full 60 watts of power, and a 60 watt Bi-Color might be just 30 - 40 watts of brightness. When going to RGB, that same 60 watt light is even more greatly reduced.

What you'll find is some people will shop for a single color light that they most often use. This will allow you to get the smallest possible light with maximum output. Then in those rare cases where you would need the light color or temp to be modified, you can add gels. My personal preference is to choose a Daylight or Bi-Color LEDs as my primary key lights (as I often will use those on skin tones). Then for rim lighting, background lighting, or accent lighting, I'll work with RGB lights.

So while the current Boltzen 30w and 55w LED lights are not RGB, they are great portable fresnels (products here), and if you need a quick way of throwing on a splash of color, the Snap Kits are currently on sale (found here). 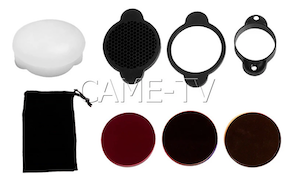 Just before I start to get more in-depth with the new CAME-TV Boltzen LED Lights that were featured at the NABShow 2017, I thought i'd start by showing how their lineup is being laid out. CAME-TV has really laid out a lot of options depending on what your lighting needs are. At this time they've sectioned out their Boltzen LED Lights into Small, Medium, and Large.

The smaller form factor Boltzen LED lights are targeted to shooters who want something portable and battery powered to be used on locations. They can be powered by 3 different options from Sony L Series, V-Mount, and AC wall power. With the lens attached you can adjust Spot and Flood, or remove the lens broader coverage, and even attach an optional Bowens Mount adapter to use off-the-shelf third party modifiers (i.e. Snoots, softboxes, beauty dishes). The 30w version is completely silent, but by adding a fan in the exact same form factor they were able to offer a 55w version. The 302/55w Lights come standard with barndoors, and if you want fast modifying they just dropped the new Magnetic Snap Kit. 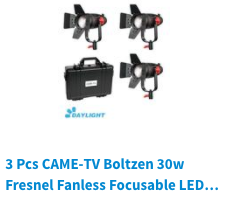 The medium size Boltzen lights are currently available in a 60w (fan-less) version and a 100w version (with fan). These offer similar features to the smaller Boltzen lights as it's possible to power them off v-mount batteries (with optional adapter cable), include barn doors, can be modified to use Bowen mount accessories, and includes a fresnel lens with Spot and Flood adjustments. 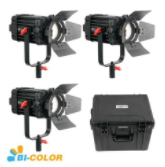 The Large form factor Boltzens again offer similar features as the medium sized, and are available in 100w (fan-less) and 150w (with fan). At this size they start to include features like DMX control, and area also available in color temp adjustable models (bi-color). 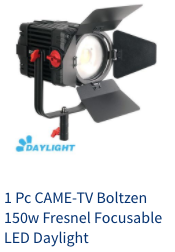 My next video will show the output between the different models, so stay tuned for this. Visit their website for more information about CAME-TV Boltzen LED Lighting (here)

In order to carry the heavy setup with the CAME-TV Prodigy Gimbal and Ursa Mini 4.6K camera for longer periods of time, I decided to try this gimbal support vest. This is the updated model Tilta Armor Man version 2 (Found here).

Here's a product overview of the new CAME-TV CAME-ARGO Gimbal stabilizer which will fly camera setups up to 6 lbs. If you're currently using a CAME-TV 7500/7800 gimbal, the ARGO would support a similar size/weight setup. The difference is this new SBGC powered gimbal also incorporates physical Encoder hardware that makes SBGC gimbals several times more stable and battery efficient.

CAME-TV has been manufacturing and selling more a wide variety of gimbals over several years, and this experience has allowed them to make each new system better over the last. As seen in the video demonstration above, right out of the box the CAME-TV ARGO Gimbal is incredibly stable and moves very the camera very smoothly (video samples coming soon). Build quality feels very solid, but only time can tell how much abuse it will handle during these next few months of use.

Right now the company offers gimbals in various sizes. The CAME-ACTION for GoPro, CAME-SINGLE and CAME-Mini2 for Mirrorless cameras, the 7800 for DSLR sized bodies, and the 8000 for heavier Blackmagic and RED cameras.

As of now only the CAME-ACTION, CAME-SINGLE, and CAME-ARGO have Encoder Hardware (and soon to be released hand held gimbal for Smartphones with Encoders). At some point this year we will see a Mini3, and a larger model to replace the 8000. 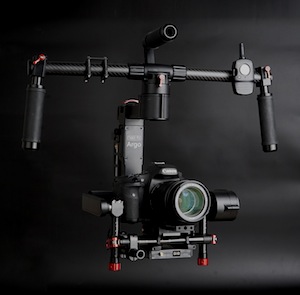 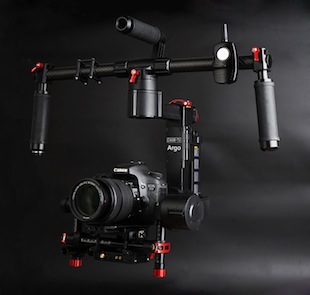 While the case is suffice to prevent scratches and should transport the ARGO safely, the foam will probably deteriorate quickly. Because of the similarity in size and shape, if you're looking for a custom cut foam case that would work with the CAME-TV ARGO, the DJI Ronin-M OEM Case will hold all of the ARGO items (and more) perfectly. 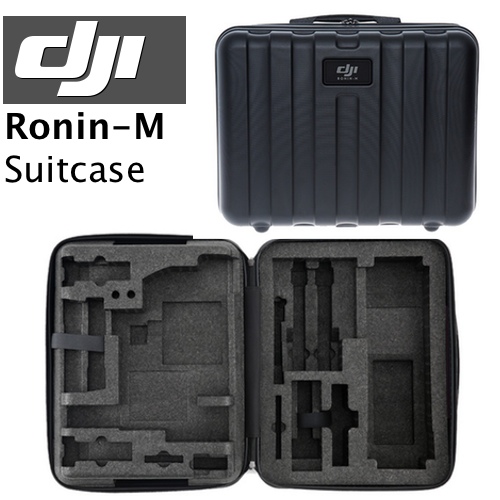 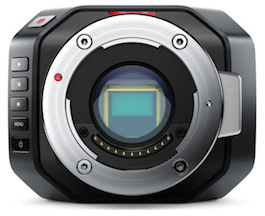 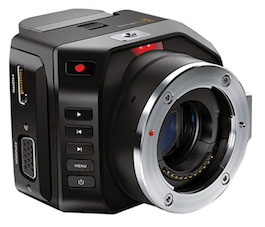 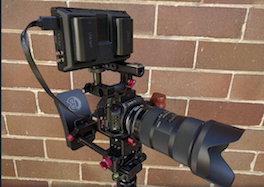 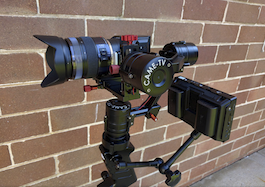 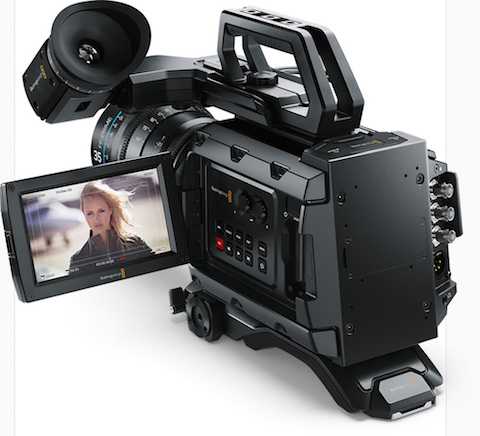 What a surprise! While this camera is pretty tough to find right now, DVEStore.com was kind enough to lend me one of their BlackMagic Design URSA Mini Cameras. I really did enjoy the quality coming from the big URSA, but it was a beast of a camera to manage out in the field. It required a heavy duty tripod and couldn't be shouldered for very long without fatigue. The URSA MINI is less than 1/3rd the weight at just 5lbs (camera body) with a more compact form factor, so very easy to move around and travel with. 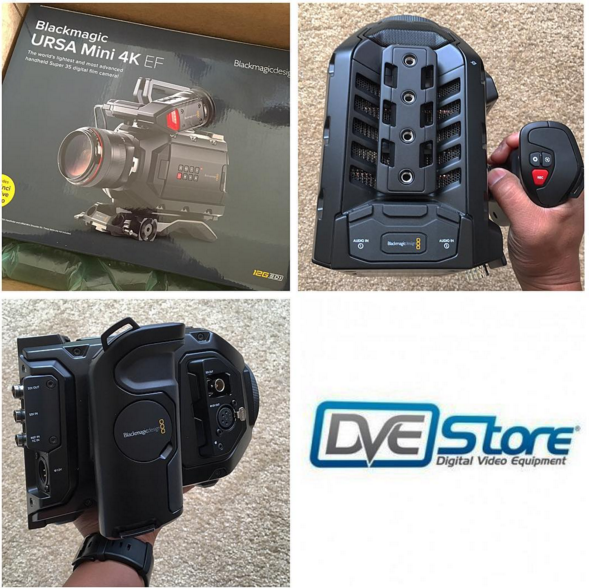 The most stand out feature over the BlackMagic Production 4K camera, is that the URSA MINI offers 4K RAW up to 60fps (yes 4K/60fps!) and for just $2995 (here). That's cheaper than a Sony A7RII. There's additional modes for 1080 up to 120fps if you need faster. If you want even better quality, the URSA Mini 4.6K sensor will offer 4K RAW up to 80fps.

The basic package for the new URSA Mini doesn't come with the top handle, shoulder pad, extension handle, battery plate, or URSA EVF which is all options you can purchase to make a full shoulder rig camera. For now, I've had to improvise by assembling my favorite rig parts together (as seen below). 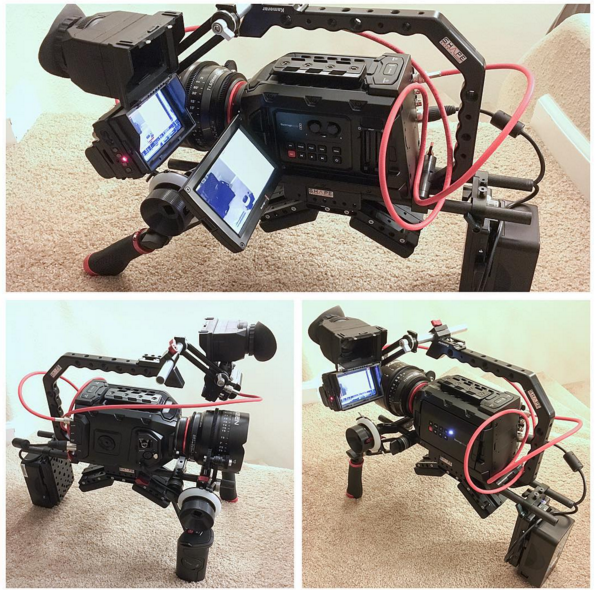 I would say the 'core' of the rig you see above is the SHAPE C100/C300 Rig setup with the Paparazzi Top Handle + SHAPE Pro Dual Follow Focus. The long 15mm Rails are lightweight Carbon Fiber from PVGear.com. The CAME-TV Shoulder Pad is placed directly under the camera, so it's very well balanced. But when the camera sits this far back, you'll need an EVF upfront. I'm using my Cineroid Retina EVF + Loupe.

I'm using CAME-TV 15mm Handles with Rosette joints. The BlackMagic URSA Mini Remote Handle just happens to be the exact same so I was able to replace one handle with the URSA Mini Remote. Now that I have most of this put together it's time to take it out this week for some test footage. If you guys have any questions about this camera, I have one here in my hands and i'll try to answer some. Otherwise you can get more information by contacting or visiting DVEStore.com 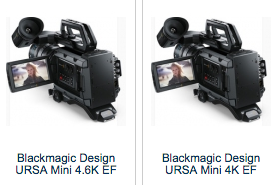 At some point in time you may find yourself on a project that will require you to send a feed to a remote monitor for others to view. Perhaps you have a client that needs to provide input about your camera settings, lens choice, framing, or movement. Or maybe you have an assistant to help with a wireless follow focus. And when your camera can't be tethered with a cable, eventually you may find a need for a kit to transmit video wirelessly. So here's a look at the CAME-TV 100m Wireless HD Video Kit.

There are systems designed for the home that you can use for a DIY solution, but often this means shorter range and lots of latency. Home kits are usually bulkier, will require you to be innovative about your battery solutions, and you'll need to find a way to mount it to your camera and monitor. Another reason you have to be careful about DIY kits is compatibility with frame rates. The Panasonic GH3 outputs a weird interlaced signal, the Canon 5DM3 and Sony cameras when set to 24p actually output 23.98. The GH4 on the other hand can output 24p, 23.98, and then you have cameras that can output 59.94p. There are a good number of Monitors that can't display these frame rates, and wireless HD Video kits are the same.

If these are reasons that would deter you from DIY home kits, the CAME-TV 100m Wireless Video Kit is clean and simple, easy to operate, minimal parts, and works great for transmitting up to 300 feet+ (depending on conditions). I have tested 1080/24p Cinema mode from the GH4 as well as NTSC 23.98, and 59.94 with no issues.

The more professional solutions are not cheap by any means, but they are designed differently than home solutions. You can find more information about the 100m Wireless HD Video kit on their website: https://www.came-tv.com/100m-wireless-hd-video-transmitter-and-receiver-p-675.html 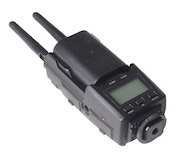 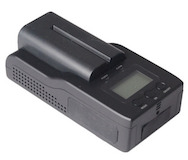 In my first review I mentioned the CAME-ACTION Gimbal could not mount a GoPro LCD BacPac because of the short screws. But I did mention I believed it was strong enough if we could find longer screws. Because people were asking, here's a demo of the CAME-ACTION GoPro Gimbal (with Encoders) supporting the weight of a GoPro with LCD BacPac and ND Filter.

It still works perfectly and is able to stabilize all this extra weight. Checking the website, there are less than dozen left. Hopefully it's not something that goes out of stock and you have to wait weeks for another batch, so if you're still deciding, this is a great GoPro gimbal and it's possible to support all your GoPro accessories. 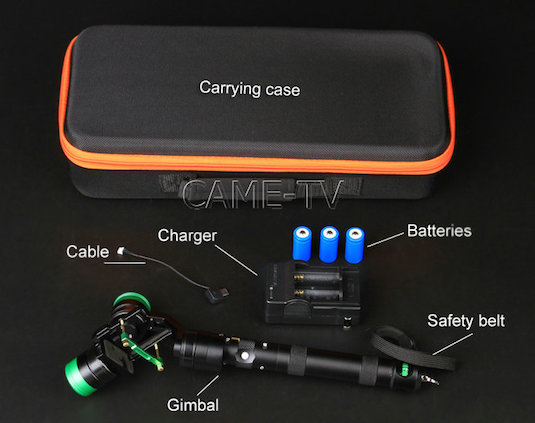 Here's an adapter you can use for Painter's Poles if you want a cheap extension for your GoPro. find it (here). 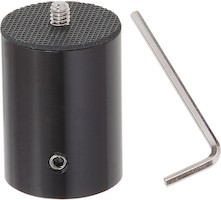 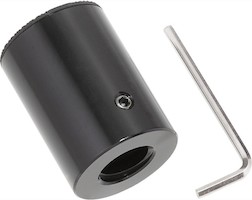