I was lucky to get a BlackMagic Design URSA 4K Camera loaner from the DVEStore.com, so I decided to take my son out to the park and test it out. The URSA is capable of 4K 80fps, but because 4K 80fps‬ requires a lot of data storage and a very fast card, I had to shoot this video at the lowest possible quality setting in 1080p ProRes Proxy. I also shot the whole piece handheld and my forearms were so cramped afterwards. This is a beast of a camera.

The card I was mainly using was the Atomos 128GB 1.0 CFAST Card which will only work with many of the lower quality and lower framerate settings. Trying other compression settings just continued to have dropped frames, and the only thing that worked well for 80fps was ProRes Proxy in 1080p. For lenses, I only used the Sigma 18-35mm

as this is not a full frame sensor camera it works perfectly.

I know this camera is far better than what I can currently get out of it so I'm hoping to get another card that will allow me to shoot at least at 4K Compressed RAW at 80fps. The next step up to utilize more of URSA's power is to shoot with a Lexar 2.0 CFAST Card

which is not very cheap.

It's not as bad as I thought it would be shooting with such a heavy camera, but you can check out more specs at the BlackMagic URSA Product Page over at the DVEStore.com (click here). 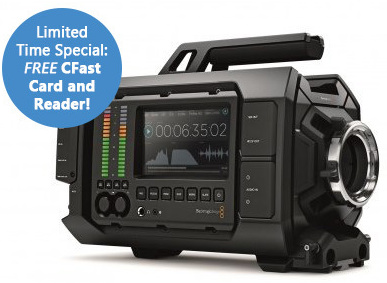