One of the most popular inexpensive DSLR Video lights would be the CN-126. It's been featured many times on this blog and to this day is still one bargain that's hard to beat. The CN-126 contains 126 LEDs, hence the name 'CN-126'. If you haven't seen it, this article is a good reference: http://cheesycam.com/calling-all-lighting-experts-126-led-lights/. This was probably my first LED Video light for DSLR videography and still have three of them in use today. I carefully selected the CN-126 because it was cheap (at the time was about 350 dollars cheaper than comparables), was the right size, used several different battery types for more power options, and most importantly was 'Dimmable'.

Aside from the 126 LED video light, the family of LED video lights available from this manufacturer include the bigger 160 LED down to the tiniest 48 LED.

didn't fly off the shelves like it's smaller siblings, mainly because it was misunderstood. Unfortunate PR, but this also helped to keep prices down. Recently people have been very interested in the 500 LED Video Light Panels, but because of it's really directional light output (a feature of LED lights) small spaces proved to be work in diffusing the light from the larger panel. Another drawback on the 500 LED video light panels is that they work off of an AC outlet. This means you'll need power at your location, and also travel with tangly extension cords and surge protectors. Even if you can modify a small battery, you might be concerned about short run times from larger light panels. This is where the 183 LED Video light was designed for. A smaller unit than the 500 LED panel and packaged with it's own portable rechargeable power source. 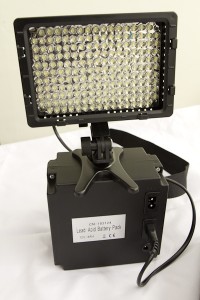 Because the 183 LED video light resembled it's smaller siblings, I believe people may have misunderstood it's purpose in life. It's not something that would be totally suitable to use on the hot shoe of a camera for Run and Gun. It's a bigger design and also exclusively uses an external battery pack. Instead, the 183 LED Video light would best be used as a portable video light similar in use as the 500 LED video panels. Throw it on a light stand and take advantage of the portable battery pack (included). The 183 'cannot' use AA batteries internally. There is only a connection for the 12V input. A nice addition is that the battery pack was designed with two outlets to power two 183's giving you hours and hours of LED lighting. Unfortunately due to poor marketing, it's been misunderstood, but you can see the design was to support two lights together with a portable battery solution mainly for stationary use like the 500 LED Video panel. 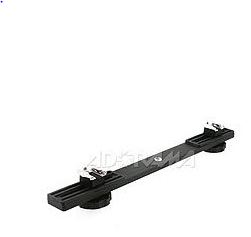 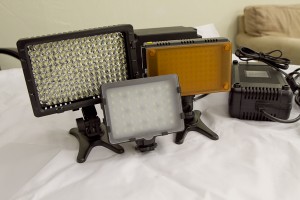 So if you've been eyeballing those 500 LED video panels but either couldn't afford it, or are turned off by the the lack of 'portable power' options, the 183 LED might fit the bill. You can travel with these lights without worry of an AC outlet and with it's power pack can shoot for several hours worry free. One thing to mention though is that the cord that comes with the unit is fairly short, but would be an easy task to snip down the middle and add some wire in between to extend. The best deal would be to grab a pair and get you up to 366 LEDs of broad diffused light, and two lights can be powered from a single battery. This setup would still be dimmable and each light can still be individually powered on or off. By grabbing a pair, you'd also have a spare battery set aside for even more hours worry free use. Pack all the items into a nice travel case, and you'll be set to add outdoor fill light or indoor studio video lighting wherever you might end up. While this is not a popular item for anyone looking to mount a video light 'on camera', these would work well for building a portable lighting solution set to be used 'off camera'. 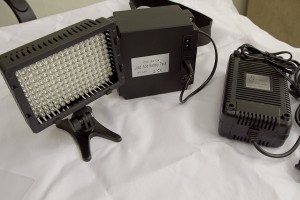