Running around to different locations on a shoot with a host is not as easy as it seems. If the host isn't nailing down lines, you're going to be reshooting much longer than expected. Teleprompters are a great way to keep your host engaged with the camera while still being able to memorize key parts of their pitch. Now that the iPad brings a bigger screen for use with exisiting software from ProPrompter (available on your iPhones too), they've created a nice lightweight sturdy setup specifically for the Apple iPad. Features also include remote sync, remote start / stop, speed up, slow down, and pause. Check out the video above from HandHeldHollywood.com demonstrating the use of the new ProPrompter for iPad. 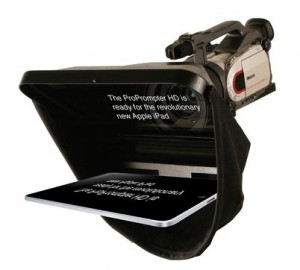 Seriously speaking, i'm the type of guy who'll try before he buys. Meaning, i'm going to try my own DIY teleprompter with my iPad. This seems like a really fun project to try and tackle. Anyone else up for the challenge?

Well the iPad came in on Saturday, but I was too busy to play around with it. You do have to go through an iTunes session with your computer before you can even get it going.

So what's the iPad mean for me? Well I haven't figured out what else to do with it, but the main reason for jumping in so soon was the ability to display photos and videos. Mainly as a Photographer or Videographer on the hustle, in my opinion this is a definite alternative to showcase your portfolio. Younger clients are used to viewing photos and videos on the internet, so this little gadget is a sure fire way to get yourself some extra sit in time.

I tried carrying it with me today while I grabbed a sandwich over at ToGos, and it was the most akward thing. I didn't receive the leather case yet (Apple ships that seperately), so it wasn't something you want to just throw onto the counter. It's very slippery so sweaty hands is going to be apparent on the screen. It was difficult for me to accept my sandwich and sign a credit card receipt while holding the iPad. So fellas, if you plan on using something like this, it's not something you can throw in your back pocket. Sure a case will help you to lay it down on some down and dirty surfaces, but expect to start carrying a Murse (Man Purse). I'm not too fond of it as something I would carry around with me, at best it would sit in the car until needed. The iPhone still rocks (AT&T service sucks though).

Don't believe the hype on how many iPads were sold just over the weekend. Similar to Tickle Me Elmo or Cabbage Patch dolls, they got picked up by iPad Scalpers with inflated prices. One of the ways they can capitalize on this, is to ship overseas or internationally where the iPad hasn't been released yet. So for the company that's responsible for tallying up reports on sales, who's tallying up the amount of iPads that just ended back up for sale on eBay and Craigslist for inflated prices? Technically they aren't really being sold to be used right now. We'll see how that playing field levels out. As for now it looks like you can still order them and inventory is still good at regular prices.

If you're wondering how I go places with the iPad, i'm rocking the Verizon MiFi device. It's basically a mobile broadband router that you can share with other Wireless devices.

Wow i'm so excited! You know I jumped on the pre-order as soon as they announced it so I can use it for.....Umm...Err...Uhhh....Well, you know because compared to the iPhone I already have it does.......Umm..Err....Uhh..., well I guess I could always use it for....hmm....uhh....Crap! What the heck did I order this thing for? Damn you Steve Jobs!! Damn you!!! You've charmed your ways into my wallet once again!! Well, I'll throw up a video of 'unboxing' as soon as I get it...then throw it back on eBay or something. Who knows...