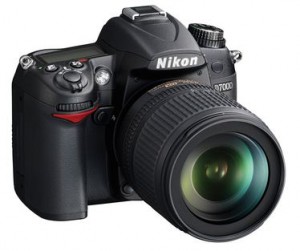 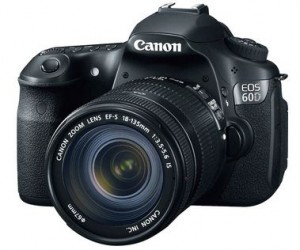 The end of 2010 is an exciting time with all these manufacturers introducing new cameras. There's a whirlwind of features Nikon is throwing down in their new Nikon D7000 DSLR. The new Nikon D3100 Digital SLR was also announced which should make some Nikon shooters happy stepping things up to 1080p video. The Nikon D3100, we say, is paired up against the T2i market. This new Nikon D7000 is the more advanced model that will be competing against Canon 60D shoppers. It's about $100 dollars over the Canon 60D, but here's some of the new Nikon D7000 features. Coming in at 16 megapixels, the D7000 can shoot 1080p or 720p. Nothing special there. Options for 24frames per second and 30fps video. That's pretty standard these days.

If you care, this Nikon D7000 has Full time Auto focus in video mode and 39 point AF system. Like more expensive Nikons this one is rockin' dual SDHC/SDXC card slots, 6fps shooting up to 100 images, a new longer lasting battery, and a Magnesium alloy body. Whoa. There's quite a bit of features that the 60D lacks. The 60D can shoot almost as fast and doesn't have a magnesium alloy body. (60D had a slight upgrade adding some weather proofing though).

The Nikon D7000 doesn't appear to move into Variable Angle LCD (swivel) territory. The Canon 60D also has 60fps frame rates which I hear is hard to live without these days, and Nikon doesn't seem to have this option. No full time auto focus on the 60D like the D7000 has, but most of us wouldn't use it. Canon doesn't go with Dual card slots, but does come in 2 megapixels more in resolution. The Canon 60D also carries the new infrared trigger to fire flashes remotely, which I don't see an option for in the D7000. The Canon 60D might be better in low light from the ISO specs, but we'll just have to wait and see. It's a tough call with pros and cons for each one, but keep in mind that DSLR bodies always change, and your real investment is going to be in your lenses and other accessories. Sooner or later you'll have to make your DSLR bed and lay in it....lay in it for quite a while..

If anybody cares about why I shoot Canon, here's my story. Decades ago (it wasn't really that long) I shot with Canon, Nikon, Fuji (which was a nikon body and Fuji chip), Olympus, and Kodak DSLR's. Canon, year after year, and to this day (my opinion) has been the 'leader' in DSLR technology. There's controversy about this, and you might say they don't make the best glass, or produce the best images, but they've always had the best balance in latest features, pricing, and quality. I can always change bodies, but it's hard to change everything else. It's why I stuck with Canon a long time ago. Today it seems like a whole new ballgame with the switch to video and kinda feels like what it did over 10 years ago. It's a new market of shooters, and who's going to end up the leader? So for the newbies who aren't quite invested, looks like you've GOt some CAreful thiNking to dO Now. (<--subliminal message embedded)