Over the past few weeks you've probably seen a few of these MustHD LCD monitors pop in in some of my videos. Here's a closer look at two specific models and what the M-701 (7 inch) and M-501 (5 inch) monitors have to offer.

According to Camera Motion Research "MustHD monitors have a full feature set and great build quality, including the excellent removable folding sun shade, battery plate and battery locking, and HDMI cable locks. Color accuracy out of the box, particularly on the M701 is outstanding. They are the best performing monitors we have found at a very affordable price."

Besides offering a detachable sun hood, an HDMI lock, and HDMI pass through, each monitor can accept three different optional battery plates for Sony, Canon, or Panasonic and share similar software features such as Focus Peaking, False Color, Black and White, Blue Only, Zoom, and more. For an entire specification sheet of each model, check out the https://CamotionLLC.com website (found here). 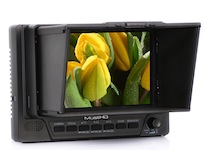 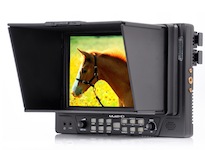