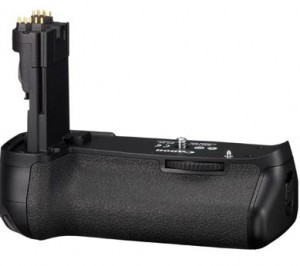 It's product name is the BG-E9 and it's the battery grip for the recently released Canon 60D. Before you go out hunting for one, it's not yet available at the usual retailers and not even mentioned on many of the big named sites. There are a few places starting to accept pre-orders of this item, but since the OEM will be the only thing available, it runs well over $215 dollars (without batteries). Why the high prices? I'm going to start a rumor here and say, my guess is there's going to be some new gadgetry involved in the grips preventing the use of non-oem batteries from being used. Accessories in the DSLR market are huge money makers, so like the batteries themselves there may be some chip information in the grips. If this is anywhere true (remember i'm starting rumors), then this could cause some problems with non-oem batteries we already own. So if you received one early, and If you're planning on taking that new Canon 60D DSLR out for a long shoot that requires power power power, that Swintronix Power Pack I talked about earlier doesn't sound like such a bad deal now.... Unless Canon has the 60D DSLR body setup to reject non-oem devices too. Mine is in tomorrow, i'll have to test.. http://cheesycam.com/switronix-powerbase-70-battery-pack/