According to Amazon's list of Top Selling DSLR cameras, Nikon's D5100 has been numero uno for about a month and a half. I'm pretty sure these sales aren't for hard core DSLR video shooters, but possibly more for Photographers. Nikon is excellent when it comes to still image qualities. The #2 spot belongs to the Nikon D7000. Don't rule Canon out just yet. Among Amazon's 'Top Ten' DSLRs being sold, (in mixed order) 5 are from Nikon and the other 5 are from Canon (no 7D, 5D Mark II, or 60D in the top ten). Sony or Olympus cameras aren't mentioned until you get further down the list. You can find the entire list here: Top DSLR's On Amazon 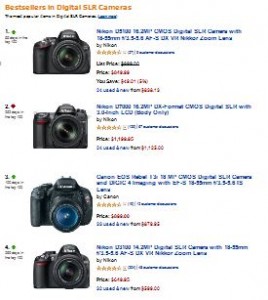