I can't wrap my head around all the deals this weekend, but as far as what I think might be of interest to this audience, here's a short list.

Rokinon Lens Deals.
They seem to be promoting these quite a bit today (and selling quite a few).
Rokinon 14mm F2.8 Ultra Wide Lens - Choice in Mount $279 (found here)

Seagate 3TB Drive + THUNDERBOLT Dock
These are so awesome, I own three. If you're working with SSD Sata drives (BlackMagic Cinema Cameras), you can dock directly to this and start editing. Once you work with Thunderbolt Speeds, it's hard to go back to USB. Sucks for me - I paid over $400+ each. Today, you can get it for just $199.
Seagate Backup Plus 3 TB Drive + Thunderbolt Dock Desktop External Hard Drive (found here)

Sandisk Extreme PRO SDHC / SDXC 32GB - 64GB
A must have for the BlackMagic Pocket Cinema Camera to shoot RAW. 64GB will give you about 20 minutes of RAW on the BMPCC, time to stock up. They are now up to 30% cheaper than when I purchased them.
Sandisk EXTREME PRO SDHC / SDXC Up to 30% OFF (found here)

[Keep checking back as i'll be updating through the day].

I was looking for a pretty inexpensive USB 3.0 card reader that can support Compact Flash, SDXC, and SDHC and decided to test the USPEED Multi Reader

based on the many positive reviews (and of course the price). Compared to an older Belkin multi-card reader I have, I can immediately see the USB 3.0 speed difference.

I'm using it with the new MacBook Pro Retina, and files are transferred more than twice as fast from the Compact Flash. For SDHC, the MacBook has a built in reader and the speed is just about the same (no benefit there if all you use is SDHC). On our iMac the USB reader works great, but the cable built into the unit is a bit short so it won't rest flat on your desk. It just sort of hangs. For traveling laptop users, I welcome the short cable. If you need a USB 3.0 multi-card reader, check out the other reviews on Amazon (Click Here). 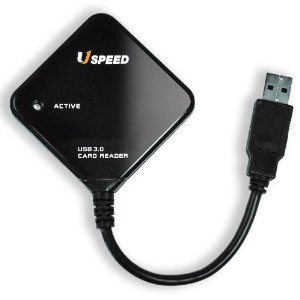 Here's a great deal on the Sandisk 64GB SDXC media going on today. This makes it even cheaper than what Transcend has to offer. Definitely a good buy for those who need the 64GB space or SDXC file format. (click here to compare some prices on SDXC via B&H).

Remember that all the new cameras are starting to move towards the SDXC format including the new 5D Mark III, and it's way cheaper than getting compact flash media (as seen here). SDXC is backwards compatible so it will work on your cameras and portable recorders that are using 'SDHC' today.

The same 64GB in Compact Flash will run you a minimum of $140 dollars +, and with SDXC it will run you just under $49 bucks (today), which is almost three times cheaper. I've been successfully using SDHC and SDXC media in my 5D Mark III for several hours of video, so I highly recommend investing in SDHC or SDXC if your cameras can take it.

If you aren't familiar with SDXC, it's going to quickly replace SDHC in higher end cameras (maybe even small consumer cams). It will definitely be a competing media with big ENG cameras that hopefully even Sony will adopt (Give up the Memory stick already...) It's all based on the SD format, but with a new exFAT file system that doesn't suffer from the same 4GB limitation as FAT32 (in SDHC cards). The "XC" is also being coined as "Extended Capacity" or otherwise known as (FAT64). Companies like Panasonic, Kingston, Transcend, and Lexar have released new SDXC cards in the last few months. Lexar wasn't the first one out the gate with SDXC cards, but they will be one of the first to release a whopping 128GB SDXC card this month (or next).

I'll be honest. When I hear the name Lexar, the words 'pricey' and 'expensive' come to mind, but also 'robust' and 'professional'. Doesn't seem like 'pricey' and 'expensive' will be associated with Lexar's new SDXC media cards. In fact sorting by price over at B&H, they stand as one of the lowest prices against the current competitors. Maybe I can finally own something 'Lexar'?

So what does this mean for DSLR shooters? Well the Canon T2i, 60D, T3i, and other recent cameras that use SDHC will be compatible with SDXC cards. Some might work right off the bat, and some might just require a slight firmware upgrade. This doesn't mean that you'd be able to take advantage of the full potential with SDXC write speeds (not yet available). Will you still have a time limit per video clip? Most likely, YES. You will still have a time limit. The limit is placed in these cameras to prevent them from overheating. So what's the benefit? Current camera designs are always held back by Video Codecs and Storage Media. Affordable SDXC cards should speed up camera designs that could now be designed around the speeds and limitations of the media. With the new SDXC media hopefully we'll start seeing cameras that can shoot higher bitrates (RAW), longer video clips, and of course a new media with more capable storage for cheaper prices. [Thanks Julio]

Lexar and other SDXC Media Cards via BHPhotoVideo.com