into a DJI Ronin

, then your interest will be peaked by the new CAME-TV Prodigy Gimbal. It's a physically larger gimbal with a deeper, wider, and taller frame offering up a lot more room to balance these types of cameras. Yet despite the larger size, the Prodigy Gimbal is almost a full pound lighter than the full size DJI Ronin (not to mention less expensive too). Here's an unboxing of what comes with the new CAME-TV Prodigy Gimbal and a quick demo of the Ursa Mini placed on the system.

The system comes with a nice rolling hardcase with durable dense custom cut foam. The battery system is powered by (4) 18650 Batteries

which doesn't lock you into propriety batteries if you need more run time.

Balancing the system requires no tools, and there are plenty of fine tuning knob adjustments to get the balance perfect. Just like their Mini3 and ARGO Gimbals, there is a built in wireless video transmitter. On the frame is a 15mm Rod Clamp for you to attach accessories such as a wireless follow focus. It comes ready with a wireless joystick, and also a Quick Mount Plate to attach the CAME-TV Prodigy in creative ways (like under a jib or RC Gimbal Car). 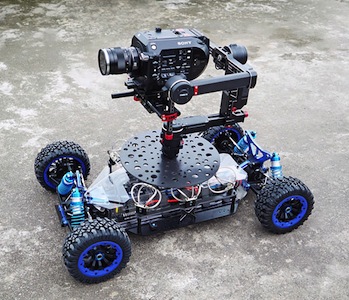 The Prodigy is the latest and LARGEST gimbal CAME-TV has made to date. The final production version is even larger than what was shown at NAB2016. It was designed specifically to resolve the issues of balancing these larger camera bodies or cameras with heavier lenses. The Prodigy is available to order now at the CAME-TV Website (click here). 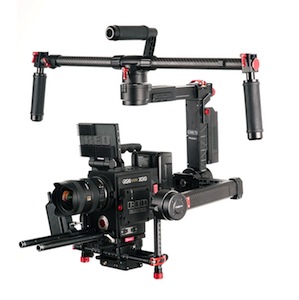 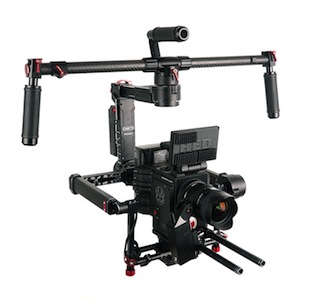 A quick look at the new Cinema Skater Video dolly

that can support larger size cameras. On the dolly you'll see the huge Manfrotto 501HDV fluid head. There is no possible way this head would mount up on the smaller Pico Flex Dolly, so if you're looking for a dolly to support something like a Sony FS100, Panasonic AF100, or even a RED Scarlet here's an option. 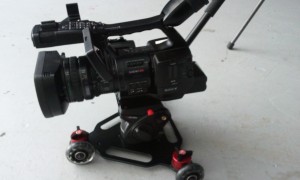 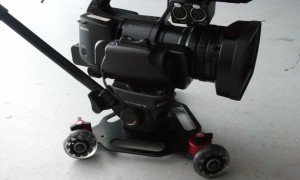 Above: Sony EX1 on Cinema Skater

Thrown on the fluid head is a Canon 5D Mark II, and the Swivi LCD (for low angle shooting). This was a quick test run as we plan on throwing on the much larger and heavier Sony EX1 on it tomorrow. Build quality is A++ on this Cinema Skater, all metal, and smooth bearings/wheels. Available from eBay (click here) 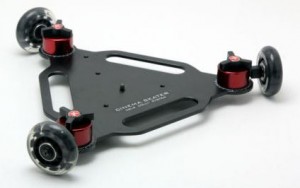 You can also find the Cinema Dolly via Amazon (click here) 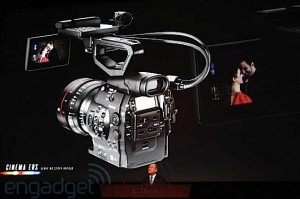 Developing story about Canon's latest Video Camera over at the Engadget live blog here: https://www.engadget.com/2011/11/03/the-canon-hollywood-event-liveblog/. From the internet they approx $20,000 dollars and available starting January 2012.

And even before the conference is over, Zacuto is already showing it on a basic shooter. 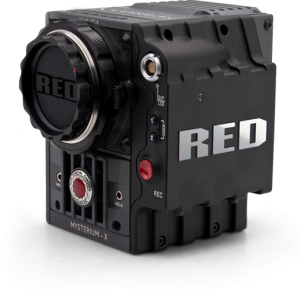 Red also announced their Scarlet which throws out some awesome specs in a sub $10K camera. There's pricing on a kit around $13K-$14K. Scarlet-X has an S35 sensor capable of 5k stills and 4K video at 25fps. Lower resolution to 3K enabled 48fps, 2K @ 60fps, and at 1K 120fps. The Red Scarlet is said to begin shipping in just a few weeks. Sounds fairly inexpensive for such a camera, but don't forget the SSD media you'll need to shoot with. Those alone can quickly bring the price of shooting up several thousands of dollars. One good point about Canon's C300 is that the dual CF card slots can be used to have a real time backup of your footage on uber cheap media. How much is that worth to some people?

While RED has made it's very impressive announcement, Canon still has another 4K concept DSLR body waiting to be unveiled. A mystery DSLR that is sporting the Cinema badge. Engadget writes - promised to be "ideally suited for cinematographic and other digital high-resolution production applications". Should be shooting at full 4K resolution @ 24p. The current 1DX is already sporting dual CF slots also, so i'm thinking the latest Cxxx DSLR will have the same. Seeing how they announced the 1Dx at about $7K and the new C300 at about $20K, my guess this mystery DSLR will fall somewhere around the $10K mark. 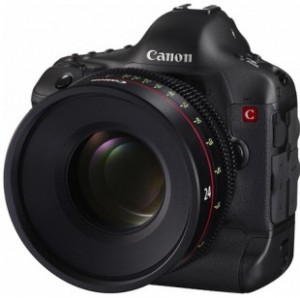