There's an on going debate between the GoProHD and ContourHD cameras. While the GoPro is having much success with it's recent sale price announcement (I know many of you swooped one up), some ContourHD fans might be happy to know there's a drop for this particular little POV cam. Normally running about $250 and then at times on sale for $199, ContourHD has even shaved off another $60 bucks from that sale price right now (full 1080p version). It's a cool little water resistant (not waterproof) camera if you're looking to start doing some bike helmet, car, or motorcycle mounting. If you want to go full waterproof, the optional case runs about $40 bucks, which is still keeps the overall total price under retail. Yes, it qualifies for Prime too which means free shipping and have it in two days (click here). 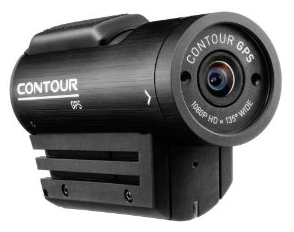 Vimeo member Carl throws up a demo video with the Canon T2i on Hague MMC video stabilizer. Something i've shown a while so nothing new there. Jump on over to 2:18 in the video and you find out how Carl balances the GoPro and iPhone properly. I've always said if your camera is too light for the stabilizer, you need to add weight to the top. Carl achieves this by adding a small Manfrotto tripod which works well for weight and adds the function of a quick release adapter. Now that the GoPro has an LCD BacPac, we could start seeing more GoPro Flying. Watch out Tiffen Smoothee, the cheaper Hague MMC with some small mods can easily balance a Flip, GoPro, iPhone and more...[Thanks Carl] 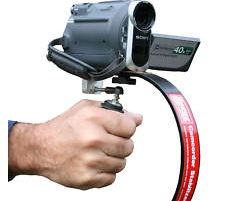 Now Carl does an excellent job with the Hague MMC, but i've used this stabilizer before and there's other (better and cheaper) options. The Hague is higher priced than the IndieHardware which I reviewed against the Hague MMC not so long ago. You can definitely save a few clams if you considered the IndieHardware over the Hague for your lightweight cameras. 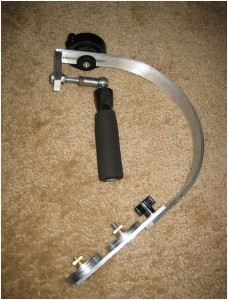 If you're really interested in flying a GoPro, you should also check out another version of these type of stabilizers from Lensse. Probably just as good if not better than the rest with a price that sits in between. There's also a smaller version offered by Lensse dedicated to small Cell Phones (iPhones) or PDA's. Right now Lensse is trying to grab some marketshare and some items are being auctioned off starting at .99 cents. These small stabilizers already designed to work with an iPhone without any further modification, just might be good enough for the GoPro too. A deal hard to pass up.. 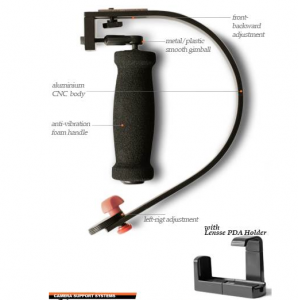