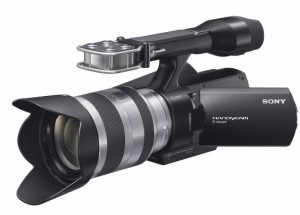 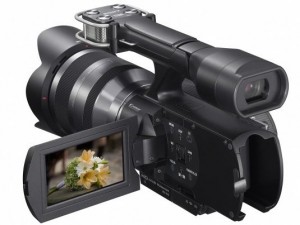 Ok, so i'm sitting here playing with the Sony NEX-3 Interchangeable lens camera trying to figure out better ways to make this shoot like a real video camera. Next I get an email from Alex Cahiz pointing me to the latest Engadget article about Sony's latest Video Camera announcement. A 3" Swivel LCD, Still Photos, 1080p, , and SDHC storage are some of the terminology being dropped, oh and also an estimated street price of $2,000 US. It should be bundled with an 18-200mm lens, so it's not a terrible price for something that acts more like a Video Camera should. Check out the full write up over at Engadget.

From the images above it looks like it has both an LCD and a ViewFinder for sharper focus? It also has a better Stereo microphone position over current DSLR's. The smartest thing Sony can do to really steal back some of the current market is to come out with a Canon Lens adapter right from the start. Hey, Apple went to the Intel platform, supported Windows installations, and now look where they are at. If Sony can adapt for Canon, i'm sure most of the Canon users would love to pick this thing up and test it out with the current gear they are already so much invested in.

Update: Looks like more specs are available and many comments are talking about the correction on 24p. It's actually 24Mbs bitrate which is half the 5D Mark II, and no indication of 24p. This is a big time deal breaker for people who can already afford the T2i with several aftermarket accessories available on the cheap. I don't think Tamron, Sigma, or Tokina are making Sony mount lenses for the NEX? This will definitely put Sony in a niche audience.