For those that just want to experiment with red/blue 3D fun, the Aiptek i2 reviewed by Olivia (above) is a neat little gadget. The Aiptek provides the newbie with simple red/blue 3D videos and photos ready to upload to YouTube and Facebook.

If you're a little more serious about 3D, you'll get a kick out of Sony's latest. Sony's new HDR-TD10 3D Camcorder records in Full 1080 HD resolution to two different sensors, unlike Panasonic's 3D Camcorder which records with a funky lens adapter to a single chip and splitting up the resolution.

The new Sony has 64GB in camera storage, but expandable via Sony Memory Stick or SDHC/SDXC, a 10x Optical Zoom (17x Digital), and a 3.5" Glasses Free 3D LCD Screen. A dedicated switch between 3D and 2D recording, the camera can also shoot 60p at full 1080 for silky smooth video or down to 24p for something more film like. Oh and yes, you have full Manual control over exposure - Focus/Iris/Shutter/ISO/White Balance. Pretty cool features for a small hand held.

The Sony HDR-TD10 also has a few Photography features as well. You can capture 7 Megapixel Still images and also includes a built in flash. The HDR-TD10 still comes with Sony's hot shoe to mount optional accessories, input for an external microphone, headphone output for monitoring, and an output for mini HDMI. There's Optical Image stabilization built in to help with both video and photos. Way too much to list for Sony's new HDR-TD10 which holds the title as the 'First True Full HD 3D Camcorder'. More information about the HDR-TD10 below. 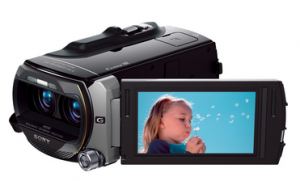