Once it was officially announced, this became one tough camera to find in stores or even online. Sony's new A55 has only been available for a short time but has already won several honors and awards including 'CES Innovations', DPReview's 'Gold Award', & Popular Photography's 'Camera of the Year'. When it comes down to price, quality, and quantity (of features) Sony's new Alpha A55 is laying out a tough act to follow. Coming in a few hundred dollars cheaper than the Canon 60D, this camera also offers a Flip Out LCD, Real time Video Auto Focus, and a 16MP sensor. All this tech doesn't sit in just the A55 though, you can save even more if you opt to go for the slightly stripped down SLT-A33. With all the hooplah around this camera lately, I decided to pick one up and see what it's all about.

Sony's new Alpha A55 is an interchangeable lens camera, but not like INC's from the four-thirds lineup or the Sony NEX cameras. This small camera actually has a mirror. Surprising they would come out with a mirror in a camera this small and you might consider it a DSLR. If you know Sony, they just love to make up their own stuff and considers this more of an SLT for 'Single Lens Translucent'. The Translucent term is all about using a special see through type Pellicle mirror. In short, this camera can shoot and auto focus super fast at the same time. While in video mode the camera has the fastest 'real time auto focus' system and does it all with the mirror still in it's down position. Sounds like a small deal, but this old tech brought back from the grave (Canon's old tech) is a huge leap in hybrid cameras that shoot photos and video. The battery is charging now, but from the short tests i've done it's fast....very fast. More fun reviews on Sony to follow soon.

For those questioning it's current capabilities, there's already news about a new firmware release that will enhance it's current features. Just like implementing 3D photography into it's NEX 5 cameras after it's initial release. 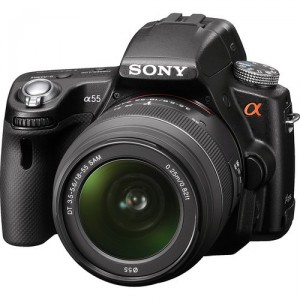 8 thoughts on “Sony A55 Digital SLT not SLR”