They sell quick release plates for the Tripods I have in the studio. Fairly cheap, so I decided to make a DIY quick release adapter for the entire large television monitor i'm using to clearly see what's going on in the crane shot. This tripod and fluid head is super beefy and much better than mounting it on my light stand. I'll mount the Asus WiCast receiver to the Monitor and I should be all set for a shoot in the studio this weekend. 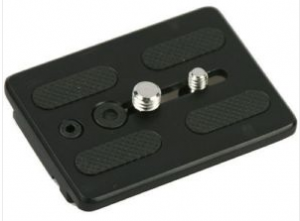