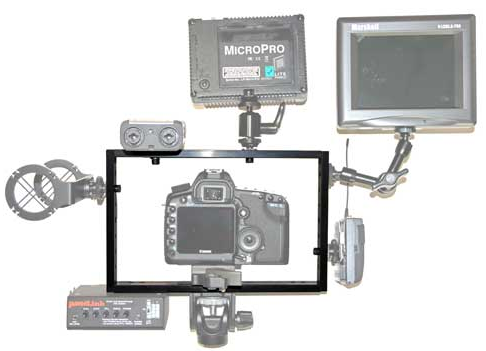 If you haven't been keeping up with JuicedLink.com, you might have missed the availability of a new line of accessory brackets. Yeah I know right? Juicedlink best known for some kick-ass audio gear, has a new small line of Camera Brackets. The DIY line of brackets are pretty straight forward where functionality comes first and well ....let just say everything else isn't as important.

Targeted to the budget minded who just need a good solid way of mounting the ever growing accessories such as microphones, LED lights, portable audio recorders, LCD Monitors, portable audio amps, wireless receivers, whosamawidgets, thingyamajingies, and even support for whatchamacallits. The DIY brackets take on some familiar shapes from straight, L bracket, and cage like with multiple alternating 3/8-16 & 1/4-20 unthreaded holes. It's also finished off with black anodizing to blend in with your gear. You can find the new brackets with photo galleries over at the JuicedLink.com website. (Can you mount rails? Yup, there's an image on the site). 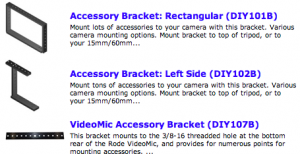