Ok, I really hate posting too many things on one subject, but this battery issue may or may not be a serious problem - I personally think it is. In fact, in order to confirm this issue I went ahead and opened up another brand new $500 dollar GoPro HERO4. That's a lot of money spent on testing (you owe me GoPro) but I think the results were worth it. Unfortunately this final test shows exactly what the problem is, but still leaves me completely clueless at the same time. Watch the video below to see what I mean.

So turns out the battery is not the problem. It's actually a bit disturbing. I have two brand new GoPro HERO4 cameras, both appear to be in perfect working condition. Yet the bacpac doesn't like one of them and it does it in a very dangerous way. Someone would never know this until after 3 minutes of powering on the camera. Had this been in the waterproof housing this could have ended up in a very different way.

With millions of these units shipping, I'm hesitant to say I have the only one in the world with this issue. If you plan to pick up a HERO4 camera with an external battery bacpac, you may want to give it a good long test outside of the housing before deciding if it's perfectly fine. As for now i'm still waiting to hear from GoPro support. If anyone else is experiencing something 'not quite right' with the HERO4, leave a comment below.

I picked up a Temp Gun earlier today and ran a quick scan. I can't vouch for the accuracy of this cheap gun, but after about 8 minutes powered on the general reading of this unique HERO4 was 156° F. 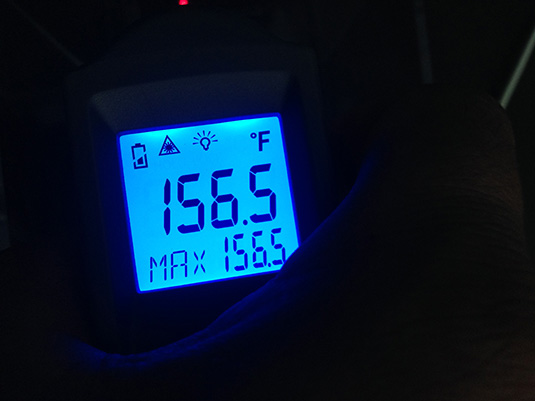 So to put that in perspective, they say that a person will receive a second degree burn in 3 seconds of exposure and a third degree burn in 5 seconds of exposure to water at 140°F. And just for kicks if you've ever placed a powered on MacBook Retina over your skin that's about 102°F-113°F which is very uncomfortable. So again, i'm not vouching for the accuracy of this temp gun, but if it's close 150°F is not something you want to throw in your pocket.

[Update] I just got an email from GoPro support and I will be sending in the unit(s) over for them to inspect more in detail. Hopefully we'll have an answer soon and hopefully it's just a very isolated incident [with mine]. I'll try to keep you updated.