I've had the chance to work with Arri's 650 and 1000 watt lighting kits a few times and they are beautiful. The fresnels allow the lights to be adjusted in Flood or Spot which makes them easier to throw the light where you need it. Of course, they are a bit pricey. Just a few months ago I posted an article about certain lighting kits that claimed to be 'As Arri' found here: http://cheesycam.com/arri-blueline-jietu-fresnel-lighting/ 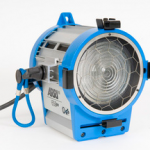