Many of you have probably already seen this video. It was posted up over a year ago as Part 1 of 2. I know i've had my eyes on it for quite a while waiting for the follow up, but Part #2 of this project doesn't look like it will happen anytime soon. This one is based on the Gimbal Handle that is used on the Glidecam series stabilizers. There seems to be a million ways to make a Steadicam Merlin gimbal handle, but little ways to make a decent Glidecam type gimbal handle. In this interesting video, there's some really nice techniques in mounting several bearings into some cheap PVC making it into a full 3 axis gimbal. It's been a year already, and there's some really good ideas in here to just let this sit back without being tackled by someone. Since video #2 hasn't been released to follow up on this, i'm curious if anyone has attempted this DIY project, and how far did you get?

If you're not familiar with what a Glidecam Stabilizer is capable of, check out my HD1000 video demonstration here: http://cheesycam.com/glidecam-hd1000-dslr-video-stabilizer-demonstration/ 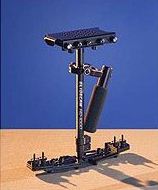