I purchased a Skyler MiniCam

about a year ago. At the time I was looking for a very small stabilizer that was easy to travel with, offered a quick release system, fine tuning knobs, and can fly at least the Canon 5D Mark III camera. I personally felt the price was very good for the build quality, convenience, and features it had to offer, but at approx $500 dollars

it wasn't something everyone wanted to dive into. Now we are seeing more affordable versions available, and here is one overview of the XCAM 2013 FL vs the original Skyler MiniCam Mini hand held stabilizer.

The XCAM no doubt shares the same design as the original Skyler MiniCam, and the 2013 XCAM version

now offers a folding leg design. For the XCAM, this means you don't have to remove the legs when it's time to pack up. The XCAM is also half the price of the Skyler MiniCam for those who were looking to get into a similar stabilizer. 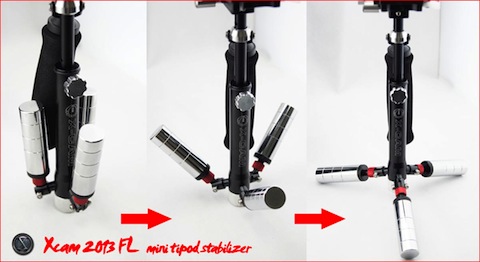 The tripod style legs from these two stabilizers are not just for design aesthetics, it also allows you to confidently set your stabilizer down without fear of tipping over. Not something you can do with a Merlin, and you may not be as confident doing this with a Glidecam. The spread legs also give clearance for a center mount, used to thread a monopod underneath when you want to be stationary and not have to carry the weight.

Both are excellent stabilizers, with only minor differences shape of counterweights) between the two. (i.e. folding legs, colored qr plate). The new XCam 2013 Mini video Stabilizer is offered at just $238 via eBay (click here) 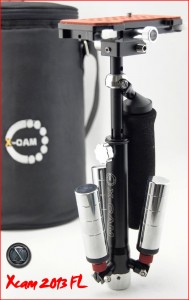 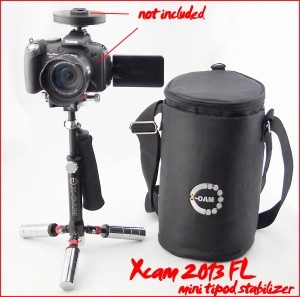