Aputure has some of the most popular LED Panels available for the budget shooter, and now they've added a nice high power single point source LED Light called the LightStorm COB120. If you've worked with Fresnels, the new COB120 can be used in similar ways. Still photographers who are now working with continuous lighting will also be familiar with it's MonoLight type form factor. With a Bowens Mount adapter, you'll also be able to use many available Light Modifiers such as a Beauty Dish, Softboxes, Snoots, etc.

They say the new COB120 may have the equivalent to a 1K-1.5K fresnel which is very good output for an LED Light of this size. There is a fan built in to dissipate heat, but they say it's extremely quiet, similar to the fan found in the Mac Pro (trashcan). The new Aputure LightStorm COB120 will be available over at B&H (click here). 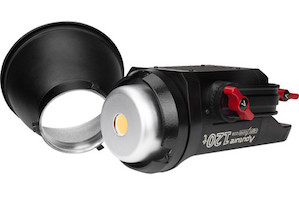 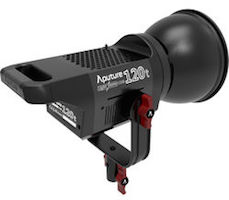