. With a sensor that's practically twice the size of it's competitors, it appears to be an amazing camera with amazing reviews everywhere. Not surprising to many fans who were already amazed with the quality from the HX9V. Convinced, I had already sold off my smaller Sony HX20V point and shoot camera, waiting for the release of this RX100 but it has been consistently unavailable since it's announcement.

Sony shows they are serious about this market, and have added Manual Controls to video mode. Flattering many would compare the RX100 to larger interchangeable lens cameras (even better than some), but there's no denying this is probably the best pocketable Stills and Video camera available today. Normally on eBay you could find some shipping from overseas, but those have a different frame rate for video (50p instead of 60p). While they are still out of stock on Amazon, B&H, and other major retailers, the official Sony store on eBay has some in stock just today. Anyone else as excited? I'm glad I sold off all of my other little Sony cameras, and just purchased the R100 this very moment. As the only option for USA buyers, i'm guessing this could sell out fast (Click here for Sony RX100) 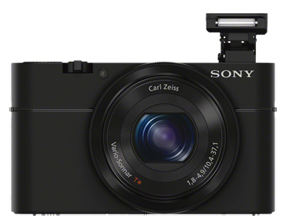