Current price reduction (via Amazon( on a few of Sony's most popular Mirrorless Cameras and G-Master Lenses. The Sony A7RII is popular among photographers with it's high megapixel full frame sensor, while the Sony A7SII is popular for video as it's still the dominating '4K low light' king of mirrorless systems. 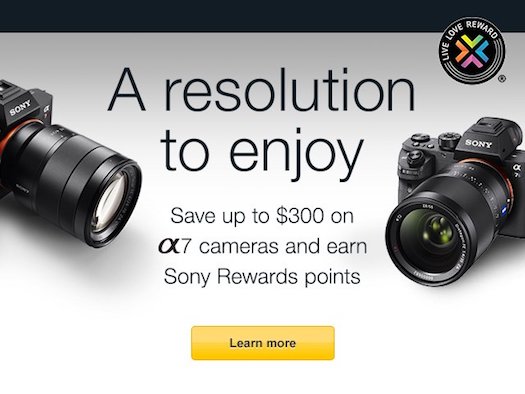 The 85mm F/1.4mm Sony G-Master Lens is best for portraits, while the Sony 24-70mm F/2.8 is a great all around general lens. The 'G-Master' lenses were designed to compliment both professional photographers and videographers. Rounded 11-blade diaphragm contributes to a pleasing bokeh quality when employing selective focus techniques. 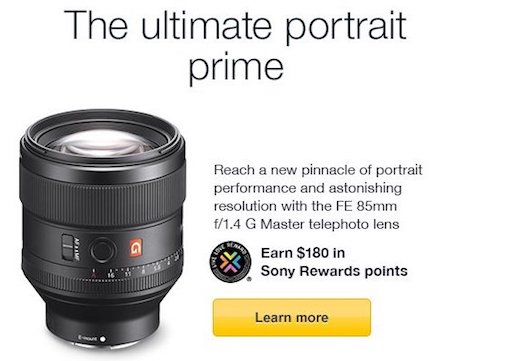 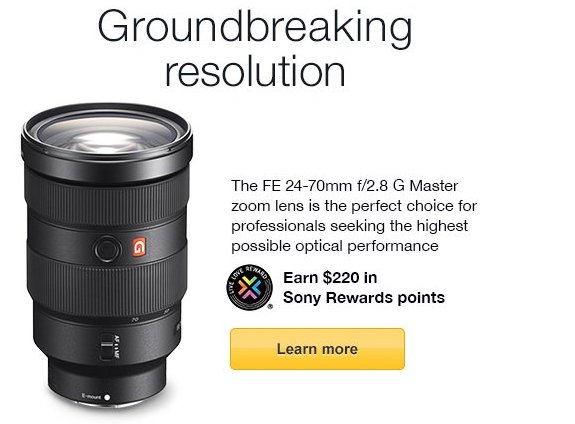 FotoDiox has designed a clever Nikon AutoFocus Lens to Sony E-Mount Adapter. The adapter communicates with the Nikon lens so that you can make all your adjustments through the Sony camera menu and dials. To adjust the iris on the autofocus Nikon lens, a tiny motor inside of the adapter mechanically adjusts against the iris lever. The new FotoDiox Fusion Nikon G-Mount AF-I / AF-S to Sony E-Mount Lens Adapter is available now (found here). 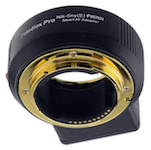 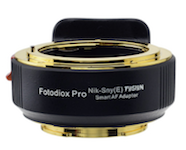 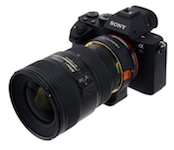 If you're looking to power up a small camera or accessory for an extended period of time, Sony L-Series batteries are a popular choice. It's a very common battery used to power anything from small LED lighting, monitors, wireless video transmitters, etc.

Sony L-Series Batteries are also available in a variety of capacities from small to large depending on your needs and are generally inexpensive. Especially if you don't want to deal with the size, weight, and expense of v-mount (or gold mount) battery solutions, you may want to check out these Sony L-Series Battery Mounts from IndiPro Tools.

While there are existing Sony battery trays that can be modified to use in a similar way, there are a few differences with the IndiPro Tools Sony L-Series Battery systems. The first would be the integrated Dummy Battery. No need to purchase one separately and no loose cable connections to deal with.

The IndiPro Tools Battery Mount comes ready with a 1/4" thread and 15mm clamp mount which makes it easier and cleaner when mounting to any rig. The build quality exceeds that of the cheaper plastic battery trays as well. IndiPro Tools has a rubberized coating, lower profile, metal backing plate, and the batteries lock in rock solid with no play. 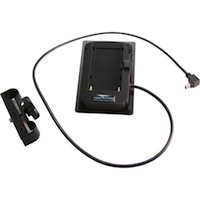 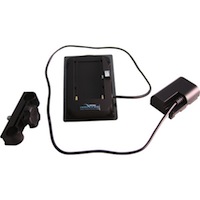 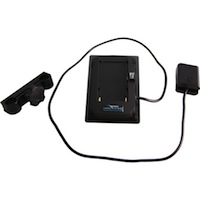 Other items mentioned
And if you're interested in checking out my previous review about the Swit Sony Replacement Battery (click here). 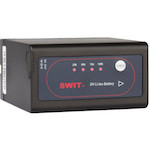 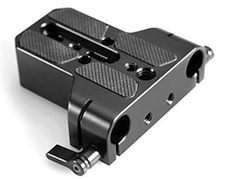 I could remember just a short time ago it was a struggle to find an affordable interchangeable lens camera with 4K internal recording. Even the original Sony A7s

didn't offer this, and the Sony A7RII

had issues with overheating when recording in 4K. The Sony A7sII

is an excellent camera but the price tag of $3,000 is not quite budget friendly. For quality internal 4K recording on an ILC there are cameras such as the Panasonic GH4

, but it's also a smaller sensor camera which some people aren't fans of.

Sony's recent announcement of the A6300 with 4K internal recording at just $1,000 dollars is very exciting news. 4K Video Internal recording (100Mbps) with an APS-C sized sensor (throw a speedbooster on this one!), offering up with SLOG2/SLOG3 with 14 stops of Dynamic Range, and 120fps HD (100Mbps) high frame rate are just a few notable features. It is certainly offering a lot of what the more expensive A7sII has, with some features far better like the new Auto Focus system.

Now there are some features that are limited such as no headphone out port, and 30 minute video clip lengths. It's not clear if the videos longer than 30 minutes will continue, or if it will just stop. But by using and external recorder, you could probably get around that. Regardless of some of the small cons, for the price there's a lot to like in the new Sony A6300 that could pull a good market share away from current some Panasonic GH4 shooters. This is a camera I think will work very well next to my A7sII and i'm planning on getting one, unless of course Panasonic announces a killer GH5 soon and then i'll have to rethink... 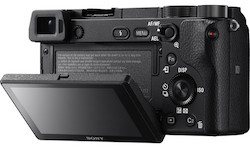 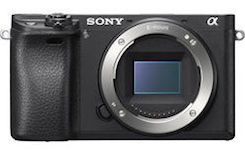 Someone commented earlier about a problem with the BlackMagic Video Assist Recorder/Monitor stuck capturing only 1080/60p. This is actually a problem I ran into a while ago even on the Atomos Shogun

, so the problem is not with the BMVD, it's with the Sony A7RII

It's annoying, but not a big deal if you know how to work around the issue. So I just wanted to clarify that the issue is not with the BlackMagic Video Assist Monitor.

The monitor has been great over the last few days, and i'm excited to use it more but my SDXC cards aren't fast enough. I'm getting dropped frames when recording 60p footage. Anyone have suggestions on what you're using for 60p footage?

Today I received the new Varavon Zeus Cage designed to fit two of the hottest cameras on the market today - the new Sony A7sII and A7rII. While i'm working on another product overview video, I thought I would have some fun unboxing the new Zeus Cage.

So if you're not a fan of unboxing videos, you may want to skip this article. Otherwise here's a neat unboxing technique that was done all in 'one single continuous take' with no cuts in the video.

There are so many cool features in the Zeus cage, and i'll be sharing more of that information soon in another video. For now you can get more information about the Zeus Cage for the A7sII and A7rII (here).

Ok well, it certainly doesn't look as cool as the final results. But it's quick, dirty, cheap, and easy. The entire unboxing took less than a minute and in the end had a cool little video. I just let it circle around while I unboxed the #Zeus. #PicoDolly #GH4 #Rokinon Fisheye 96fps @servocity Continuous rotating servo with servo speed controller.

When Sony originally released the A7 / A7r / and A7s cameras, they shared the same body. So specialty cages that were designed for one camera could be used on the others.

Now that Sony has changed the body style on the Sony A7RII with a larger beefier grip, older A7s custom fit cages will no longer work. So here's a look at a new Cage System from CAME-TV designed specifically for the new Sony A7RII camera body.

Recently Sony has made an announcement for the new Sony A7s II. So far from the photos and videos, the body looks exactly the same as on the new A7RII which means that this new CAME-TV Cage may be able to work as well. You can find more information about the new CAME-TV Sony A7RII Cage (maybe A7sII also) at the product page (Click Here). 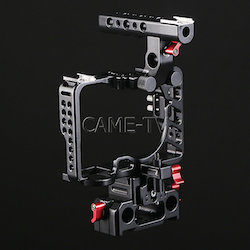 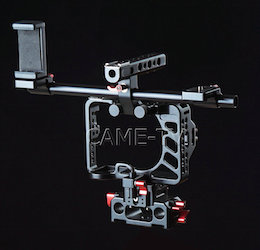 The original Sony A7s is still an outstanding little camera, but with the announcement of the new Sony A7s II, i'm sure existing Sony A7s owners might be thinking about upgrading. I'm a Sony A7s owner, and here's a few reasons why I think it's worth the upgrade.

First, you now have the option of 4K internal recording. We don't have enough information just yet about how long it can record or if it will overheat like the A7RII, but either way 4K internal is a damn good option to have when you need it.

Next there's 5-Axis In Body Image Stabilization (IBIS). I have been using this in the new Sony A7RII and I can't tell you enough how much this new feature can help with your footage. If you move around a lot, work with a shoulder rig, hand held, or just like older lenses with no IS, the 5-Axis IBIS will be your best friend.

The new Sony A7sII also has the option of SLOG3, which offers up a flatter profile than SLOG2 while offering more detail and information in the shadows. The new A7sII also has a base ISO of just 1600 instead of 3200 which is way more manageable if you have to shoot outdoors on a bright day.

The new Sony A7sII also has faster AF for movie mode over the original A7s.

Even though the A7s was known for being the low light king, the new A7sII is even more improved for low light shooting. 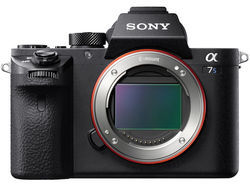