Here's a stark contrast between two different gimbal stabilizers. One is the Nebula 4000

- a handheld pistol grip style 3 axis gimbal for small cameras. The other is your typical 3-axis gimbal frame. While the goal is to have the smallest stabilizer possible, there are cons to going with something too small for cameras like the GH4 and A7s.

Dave Dugdale over at LearningDSLRVideo.com has recently picked up the Nebula 4000 to use with his GH4 camera and has been sharing a few different tutorial videos. Here's the first video showing his initial setup process.

Granted that with some practice you'll be able to balance your camera faster. You may also get better results with a lighter or shorter pancake lens instead of the 12-35mm F/2.8 on the GH4. Obviously the tiny form factor makes this a great compact tool, but it also comes with many cons. The pistol grip design will make low mode shots quite awkward, and a GH4 sized camera will have limited tilt up/down movements before it starts hitting the back roll motor. While I think the Nebula 4000

may be a well made product, it might be best used with smaller cameras (or at least ones with very compact lenses) and when you don't need to re-balance your camera setup. 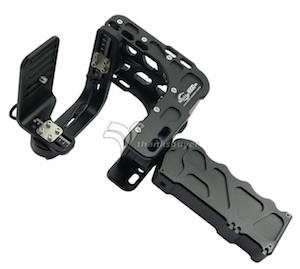 The DIY 3-Axis Mini Gimbal Frame Project
In Dave's video you'll notice he may reference a project gimbal i've been working on. For a camera the size of a Panasonic GH4 or Sony A7s, I personally feel there's a minimum size that would allow you to get the most of your camera while still remaining portable and compact. Over the last year, I've built a couple of mini gimbals from scrap parts simply for personal use. Just recently, I decided to take notes of everything I wanted to have in a compact gimbal and had a custom designed frame machined from aluminum. Here's a look at an early prototype i've been using for several weeks with my GH4.

[Update 12.23.2014] These are unreleased videos I shot a while ago as I was documenting the process. I decided to release this today that shows some additional information.

So far from my knowledge, this DIY Mini Gimbal frame has the potential to be the most affordable compact system for GH4, A7s, or BMPCC cameras that allows use of a Manfrotto quick release, provides access to the HDMI + Audio ports, and offers tool-less adjustments for quick balance. So far i've only made 4 of these gimbals and i'm working on a 'DIY Build Video' to show how anyone can wire up their own gimbal. The idea is that hopefully a few more of these frames can be made. If you're interested in this project leave some comments and keep following the blog. 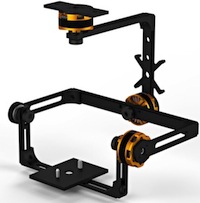 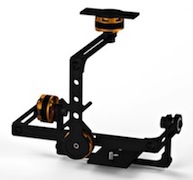 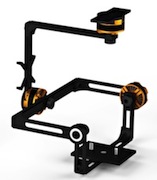 Earlier today I had a comment about the CAMETV 7800 Gimbal and how people may want the 'camera over handles' mode. In this mode you don't have to raise your arms very high and will have less fatigue. Not exclusive to the 7800, any 32 bit Alexmos / Basecam gimbal can perform various positions and remain incredibly stable. In this video (below) i'm demonstrating just how stable these gimbals can be with the right configuration.

Now I realize the DJI Ronin is the best bang for the buck and it is an amazing system to carry heavy payloads. The main reason I use other gimbals is because i'm typically working with smaller cameras. I don't need to travel with the bulk, and I don't need to run around with the weight of the Ronin. If you watched the video above, you can see how even me (small guy) can man handle these all carbon fiber gimbals with just one hand [try that with a Ronin]. Even while switching through all of the different positions, the 7800 remained completely stable.

With this stability in a sub $1300 dollar gimbal like the 7800, you can see why it's really hard for me to go with a heavier gimbal like the Ronin. Unless of course there's a need to carry such a heavy payload, i'd rather just borrow a friends or rent one. Otherwise i'm happy to work with a more convenient system. As you can see in my video i'm using a heavier Canon 5D Mark III with Sigma Lens. If you're shooting with a GH4 or Sony A7s, these smaller lighter gimbals should make your life much easier when you have to pack, travel, and shoot all day.

Now the tricks I show on the CAMETV is not limited to nor exclusive to the 7800. Any gimbal running the new 32 bit software that has a properly balanced camera can operate just the same. It's extremely time consuming, but i'll try to do more videos on showing you a step by step process on balancing soon, but if you guys have any questions let me know. 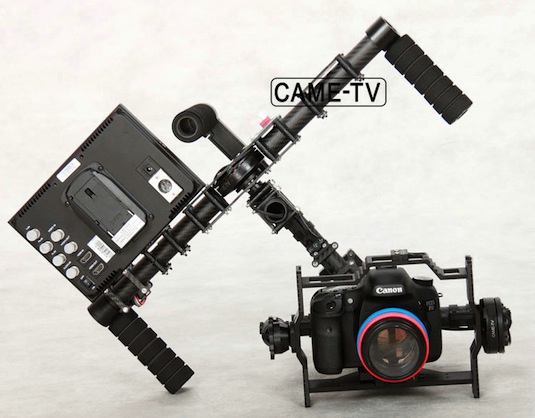 Earlier I tested the CAME 5000 stabilizer with a Panasonic GH3 (found here). These new stabilizers work best when your camera is perfectly balanced. There was no instruction manual on how to properly balance a camera on this stabilizer, but I think i've figured it out.

So here's a very quick follow up video on how to balance a camera on a 3 Axis Brushless Motorized Gimbal Stabilizer. I'm just using a DIY Frame with a bunch of 15mm Rails, clamps, and friction arms to hold up the Gimbal. However you manage to hold up your stabilizer, try to keep it as level as possible before starting your balancing steps.

Now that I think my camera is balanced much better, i'll have to take her out for a spin again. In case you're just dropping in on this article, you can see my first test run (with an imbalanced camera) at the following article: First Impression – CAME 5000 3-Axis Brushless Motor Gimbal Video Stabilizer

[Tip] This tutorial is not limited to these motorized gimbals for video. If you're a photographer working with a large lens, the procedures found in the video can also be used to balance Photography Specific Camera Gimbals (found here via eBay).