Seeing how we are able to achieve very high quality video on many of the new compact point and shoot systems today, Glidecam has recently released a mini version of video camera stabilizers. The Sony RX100 point and shoot which produces high quality video and only weighs under 9 ounces. Even a Sony NEX6 with Pancake lens should come in around 12 ounces. The new iGlide line of stabilizers are designed to fly cameras weighing up to 14 ounces.

Overview:
The Glidecam iGlide Handheld Stabilizer for 14 oz Cameras (Black) is a very lightweight stabilizer for use with GoPro and other small cameras weighing up to 14 ounces. A camera mounting plate with 1/4" mounting threads is integrated for attaching a camera. You can also use the stabilizer with an iPhone via an optional iGlide Adapter.

The new iGlide stabilizers are available in standard Black or more colorful options for under $150 dollars via B&H (click here).

This video is complete rambling about different feature sets of a few 'Small Camera stabilizers' I use. I have quite a few very large ones as well, but for now i'm just touching on these specifically because they are so close in what audience they are intended for. The three small stabilizers i'm showing are the Flycam Nano

, and the Skyler MiniCam

(new and old). If you're not interested in knowing about the differences of such products, I suggests you skip this video since it's quite lengthy.

I'll start by saying that it's possible to get excellent results from ALL of these stabilizers. Don't be fooled to thinking you'll be achieving excellent results on the first day, even if you wanted to spend thousands of dollars on high end gear. With any stabilizer, it will require practice, practice, and even more practice. This video will probably generate more questions, but hopefully it's an insight of the different things to look for when shopping for a stabilizer.

The Skyler MiniCam is the most expensive of these three small stabilizers. It's also the smallest and lightest, but yet can still fly just as much weight. You can remove all of the parts from the Skyler for travel and set it back up without having to rebalance. Everything falls perfectly in alignment. It also offers a quick release stage - not only for packing up, but it can be used to move your camera to a tripod, slider, cage, rig, etc with the included 'mounting base plate'. The design of the lower sled makes it easy to adjust up and down for weight compensation, and does not have the same potential to shift (like the Glidecam and Flycam models). Build quality is top notch.

If you're just starting out, doing it as a hobby, or just curious about flying camera movements you could start on the lower end. The actual practice of flying a stabilizer is more important than the stabilizer itself. Sell it off later when you're ready to upgrade or try renting one for a weekend to see if it's something you're interested in, and how often you think you'll be using it. If you're already flying a stabilizer and need more of the convenience of fine tuning knobs, quick release plates, compact for travel, and ease of rebalance, then look for the higher end models that offer some of those features like the Glidecam HD or Skyler Minicam.

. Let's start here. Pricing? Not very competitive. Everyone knows about my Hybrid setup using the Steadicam Merlin Vest / Arm + Glidecam HD4000. This hybrid setup works extremely well and you can probably put one together yourself for around $2300 or so. The Konova Stabilizer system will still run you over $3K. But if you wanted to compare apples to apples, this is more similar to Steadicam's Pilot system which sells for about the same price.

Pricing aside, what does it have to offer? The larger stabilizer should hold 10lbs on the top fairly easy. That's a bit more than the weight a Glidecam HD4000 is rated at. The unit is all metal, lightweight, and gimbal is very smooth. The top stage adjusts forward/back/left/right to center your camera. To balance the entire stabilizer, the Gimbal can be positioned further up or down the post.

The arm is huge and very well made. It can be positioned either left or right side by flipping the mounting bracket. It can definitely carry some heavy weight, but isn't designed to be fine tuned for light weight setups. (The Merlin vest can be tuned for light camera setups). The Padded Vest is very lightweight, easy to slip on/off and adjust various ways for comfort. From an operator's point of view, the Konova arm is much easier to place into the vest system than a Steadicam Merlin Vest (I just leave the Merlin Arm on all the time) and also easier to remove when breaking down. The stabilizer comes with a stand adapter (attaches to a light stand) to dock the stabilizer when not in use.

Let's talk cons. Well price is one. There are already so many other options on the market with either the same price or cheaper. Unless they can bring the price down, it's going to be a tough market to crack. It offers nothing different than what is already available. This unit is wired, but is missing HDMI. HDMI seems to be a growing trend not just for DSLRs, but for other popular cameras under 10lbs. (i'm going to mod this one with my own HDMI). The monitor that it comes with is outdated too, so I'll be switching that out with the SmallHD DP6. So that's it so far, and i'll be taking it out for a test as soon as I can build it up to my liking. Stay tuned. 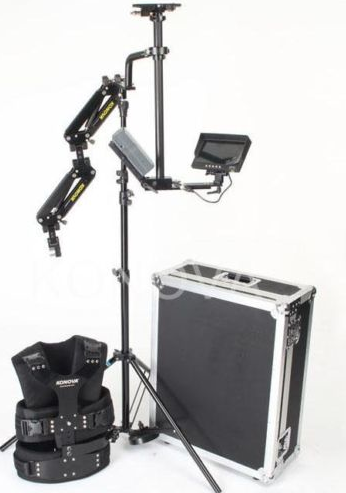