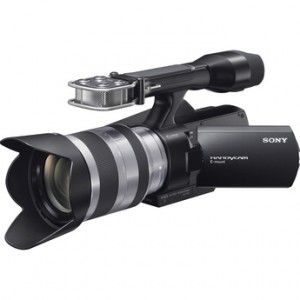 Apparently the Sony NEX-VG10 is now available here, but how many people knew about this? When Sony first announced this interchangeable lens Camcorder (not DSLR), it caused quite a stir. Shortly after it was drowned out by all the news from upcoming Photokina. Panasonic also had better specs on the upcoming AG-AF101 which would be a direct competitor against this new Sony NEX-VG10. It's got many similar DSLR features with manual controls over shutter, iris, and still takes 14MP images. The microphone and audio is said to process much better than current DSLR's, but I don't think this is considered the 'game changer'. There's a full review over at B&H's Insights: https://video.bhinsights.com/content/hands-review-sony-nex-vg10.html if you care to know more.