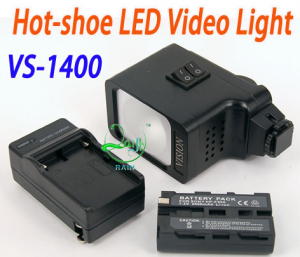 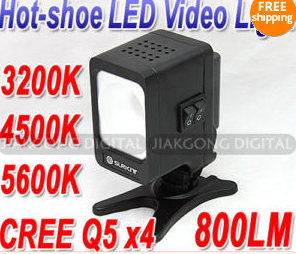 . These LED video lights are fairly new, i've only been pointed to them a few times in the last few weeks. They claim to have housed 4 CREE Q5 High power LED's into an aluminum housing (which supposedly helps dissipate heat). CREE is a US company that makes the best LED's in the world and is carefully color balanced to exact specs. This LED video light comes with a rechargeable 7.2V Sony style battery + battery charger + LED light + cigarette lighter adapter for charging.

There are two different models of these CREE LED Video Lights. First model is called the VS800. Two of the LEDs are 3200K and with a single switch you're running tungsten. Two more LEDs are 5600K so you can toggle to Daylight. Turn ALL FOUR of the LEDs on, and you have mixed lighting around 4500K.

The second model is called the VS1400. This version uses all 4 CREE LEDs in 5600K, but still has two switches for half power and full power. The light is rated at 16W (could be 4W x 4 LEDs). Burn time is a really short 45 minutes on a single battery, and the beam angle (area of coverage) drops down to a narrow 60 degrees. Anybody use these things or have seen them in person? 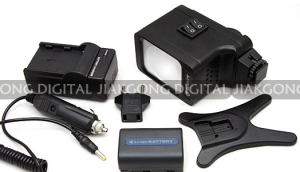