Looks like a fun little DIY Arduino based motion controlled slider project is unfolding. Starting the platform out with IGUS Drylin W rails and carrier (wider version), and adding in a custom fitted pulley system. My guess is that the programmable controller will eventually be used for Timelapse movements and intervalometer trigger. Part 1 & Part 2 videos show some of the DIY process, but more information can be found from Vimeo member Stefan Kohler. Oh and if you're hoping something like this will hit the market, apparently it's not planned for it.

Of course, if you're looking to get into Motion Controlled sliders, you can't go wrong with Dynamic Perception. 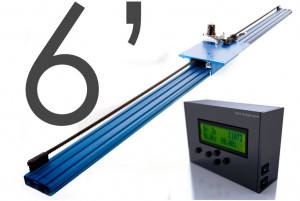 Also designed with Arduino in mind, these time lapse sliders are the best on a budget. Highly recommended for anyone who wants the 'now' and not mess with the DIY process. Check out one of the latest videos shot with DynamicPerception.com sliders.

Description:
This was filmed between 4th and 11th April 2011. I had the pleasure of visiting El Teide. Spain´s highest mountain @(3718m) is one of the best places in the world to photograph the stars and is also the location of Teide Observatories, considered to be one of the world´s best observatories. More......