People have been asking to see some video footage from the CAME-SINGLE, and so I thought I'd throw something up. It's not pretty, but that's exactly what I was going for in this example. Here you've got over 4 minutes of Raw footage, uncut, unedited, no slow motion, and no image stabilization. I've also included a BTS video showing the gimbal in use.

Single handed gimbals are great, but this means you have to be extra careful as well. Two handed operation will always allow you to be more stable. So in my setup i've added a 15mm rod adapter under the handle, a 15mm rod horizontally, and two 15mm handles.

Even though i've added extra handles, there's several instances to which the gimbal was in extreme angles (low mode) and time where I only operated with one handle. The gimbal still performed pretty darn good. For those who are familiar with using alexmos gimbals, you'll notice there are no 'twitches', 'micro jitters', and the horizon (roll) did not drift. It stayed level after the entire time even after panning, tilting, and low mode shooting.

In any case, hopefully this footage has been helpful. The CAME-TV CAME-SINGLE gimbal can be found at their website (found here).

A few people have asked, so here's the basic setup I used for my handles. First, I attached a Pico Plate under the handle, and this lets me attach a 15mm Rod.

And finally I was able to my 15mm Handles to each side. 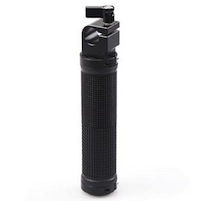