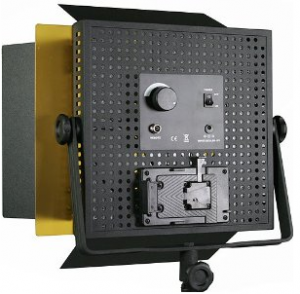 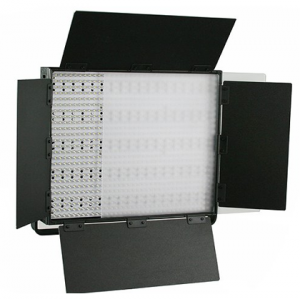 There's been some new LED Video panels floating around the Internet, but mainly coming from over seas companies. Not much has been said about these panels, probably because someone is waiting to hear what the quality is like. Well now it's finally available via Amazon and ships from the US. I got my hands on a set and I'm going to try to make it into the studio today and throw up some examples of these new LED Video Light Panels. So far we've been drooling over them for the past few days. These are from a different manufacturer and priced higher than the popular 500 and 1000 LED panels found here: http://cheesycam.com/bts-sample-with-cheap-500-led-video-light-panels/

These new 600, 900, and 1200 panels are thinner than the other models, extremely lightweight, dimmable, and can be powered via DC batteries. It sits centered in a Yoke mount which makes it easy to reposition and keep the units balanced. The biggest difference with this light compared to other ones is the 'throw' and color temperature. These LED panels throw light much further and is very bright. Putting the 1200 LED panel against a Sony EX1, the temperature was detected at 5600K - Yes! Throwing on the provided Tungsten filter, the Sony EX1 registered it as 3100K - very close. These new LED Panels come in 600 LEDs, 900 LEDs, and 1200 LEDs - all dimmable and options for Sony batteries V mount.

Should the available US links (above) be out of stock, then you can find them over seas (below)