Aaron mentioned he received the Yongnuo 560 Flash for off camera use, and threw up a demo video. From the information in the video, i'm pretty impressed. This YN-560 version doesn't support TTL, but when using my Yongnuo RF-602 triggers, I'm using my flashes all manually anyways. I can see event photographers using these either on light stands or clamped around the ceiling to get some extra light into a dim lit event. Especially since they are fairly cheap, I wouldn't be as worried about damage or theft leaving them around. I'm totally paranoid just throwing my Canon 580 EX II's in places that seem 'untrustworthy'. I guess I found my backup solution. Thanks Aaron, for the demo on these inexpensive Yongnuo YN-560 flashes. 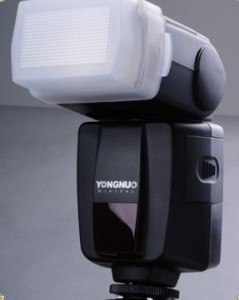