Timecode is a simple way to sync Multiple Cameras and or Audio Recorders quickly with frame accuracy. Cheaper consumer cameras may have an option to reset timecode within, but after a short period clocks begin to drift apart between your different cameras. This is because they don't have accurate internal clocks. And though they may have an option to send timecode out (over HDMI), they don't have a way of getting timecode in from an external accurate Timecode Generator.

Tentacle Sync Timecode Generators solves this problem by working as an external clock and embedding timecode into one channel of audio. This will essentially work for any type of camera with an audio input such as a Panasonic GH4 / GH5, Sony A6300 / 6500, and can even work with a GoPro. This can even be setup to work with tiny cheap audio recorders like a Zoom H1.

Once you have each of your equipment 'listening' to an external clock, it doesn't matter how often you start and stop video across multiple devices. The Tentacle Sync (clock) is continuously running for up to 40 hours, and every recording you begin will have accurate time embedded into the audio or video file (metadata). Depending where you want to send this timecode, they have a number of different adapter cables from XLR, BNC, USB, TA3, Lemo, cables for RED + Arri Alexa cameras, and even works when recording with iPhones - (all found here).

The first comment people have is 'Just use PluralEyes', which works great to sync files by analyzing each camera's recorded audio. But there are many situations where your cameras won't share the same audio. For instance, projects like reality shows where one camera may be inside a car and another across the street. Or when covering sporting events from different sides of a stadium where you're picking up random conversations (screaming + yelling) from a crowd.

A few years ago, I once helped to cover an event on a Golf Course. Believe me when I say there's not a lot of audio captured in each camera to use as scratch audio for sync. Often we had cameras set a distance away from the Golfer and cameras on the other end of the course (to watch the ball drop). Because there was always distance, wireless audio had too many drop outs and too much interference. So for talent audio we opted to use belt worn portable audio recorders. Needless to say, attempting to sync all of the audio and camera angles in post was not an easy task. This would have been much easier had we worked with timecode.

Tentacle Sync Timecode Generators are small, lightweight, affordable and very fast to setup. I really like how they have a built in microphone allowing you to still capture scratch audio, or to use a splitter cable and allow you to still input from an external microphone. Obviously using Timecode in your workflow will save you hours and hours in post editing when shooting multicam projects. 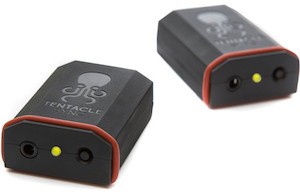