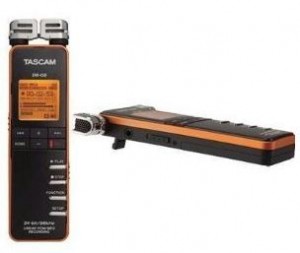 . In fact many of the audio specs and recording features are dead on to the function of the Zoom H1 recorder. Even though the Tascam DR-08 was announced and released earlier than the Zoom H1, I doubt it ever really 'took off' as quickly with DSLR video shooters for a few reasons. Zoom already had a huge foot in the door from the H4n multi track recorder. DSLR users spread word of this inexpensive quality recorder and it quickly became the standard. Besides the lack of marketing into DSLR video the Higher pricing possibly played a rold in holding Tascam back from exploding as quickly as Samson's Zoom. 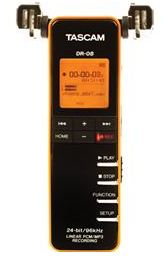 The recent announcement of the Tascam DR-08 Portable Digital Recorder

was almost invisible to the DSLR market. The estimated street price of $200 or higher for something so tiny and less functional than the Zoom H4n didn't make much sense to DSLR shooters. The reason this article is being posted now is the recent drop in pricing over at Amazon. This Tascam DR-08 Portable Digital Recorder

is now available for $135.00 getting the pricing closer to it's Zoom H1 competitor.

Besides the slim profile which would make this a more suitable 'in pocket' audio recorder to replace wireless setups, there's also more flexibility to the microphone positions than that of the Zoom H1 giving it the ability to lay flat on the table and still target your subject. The Tascam does require more batteries than the Zoom H1, but i'm more interested in the build quality and relative size comparison against the Zoom H1. For $200+ dollars the pricing on this portable audio recorder would be a huge deal breaker. Now that pricing is coming in at the new $135.00, just slightly over the Zoom H1's $99.00 dollars, i'm curious if the extra $35 dollars is worth the upgrade. If you're interested too, I'll have the Tascam DR-08 vs Zoom H1 Portable Audio Recorder side by side comparison later this week.