Here's a walk-through on my BlackMagic Design 4K ATEM setup used for live streaming out to the Internet while switching between several different cameras. It's certainly not elegant and i'm open to ideas on how other people have their setup, but what I have so far seems to work pretty well. Once everything is in place, we don't have a single hiccup.

First, let me state the the large 2U tray with Yamaha Mixer has been replaced with a simple Nady 1U XLR Mixer. So this cut down size and weight when i'm traveling with the 4U Rack Case I have everything mounted in and it looks a lot cleaner. 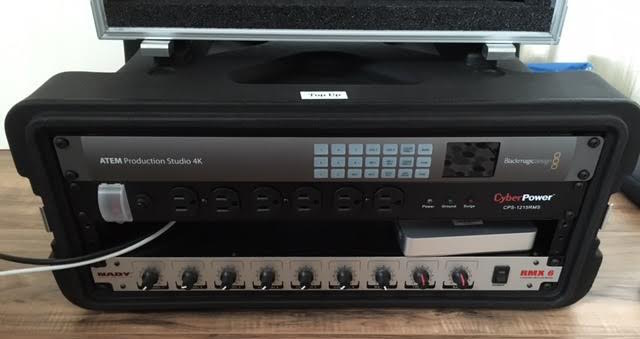 NADY 1U XLR Mixer in 4U Rack 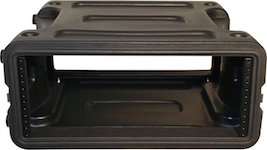 4U Rack Case with Front Back Covers

The reason i'm using a mixer is so that I can input several microphones, control microphones independently (with hardware controller), and feed the signal to both Left/Right. There are two XLR inputs behind the ATEM, but if you were to use the XLR inputs directly the audio would just be on one side (left or right) unless you used some special splitter. But again that would limit the amount of mics you can input and still wouldn't have the physical hardware to adjust gain.

We're not using the OSEE LCM156 Monitor in it's Flight Case, because it's just so handy to travel with and just the right size to see multicamera feeds. The professional monitor can also see just about every frame rate and we can use either HDMI or SDI inputs. We often had trouble using computer monitors or cheap televisions. 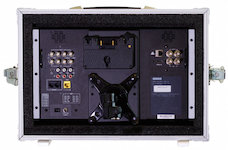 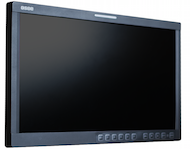 When your Program Feed (the final video output your audience sees) is streaming to YouTube, it will be compressed and sometimes only at 720p. For this reason we are recording the same Program Feed to an Atomos Shogun (you can use an Atomos Assasin too) locally in case we want to upload the better quality version later. Now because we're only capturing 1080, you could use a BlackMagic Design Video Assist Monitor but that records to SDXC Cards. I think I'd rather have my recordings on SSD. 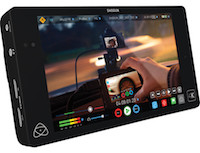 To send the feed over to Wirecast, we have a BlackMagic Design Intensity Extreme (now discontinued). This takes an HDMI input and sends the video to your computer over Thunderbolt. A replacement for this device would be one of their UltraStudio Express devices but the cheaper ones will lack the HDMI pass through. Still it would work to send the feed to your computer for Wirecast streaming to YouTube (or other services). 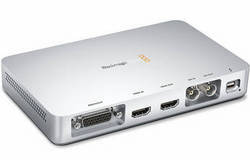 I specifically chose the GH4 cameras because I wanted to work at least three cameras. The GH4 is also small and inexpensive compared to something like a Sony A7s. The batteries also last all day compared to other Canon or Sony cameras. The GH4 can record 4K internally to the SD Card while still outputting 1080p (and at any framerate) over HDMI. This means we can have an additional backup recording in each camera. The BMD ATEM also needs each camera to have the exact same framerate and resolution, so it's important that every camera can output the same. I really can't think of a more idea camera unless you go with a dedicated camcorder of some type. 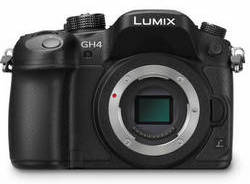 Now I don't know if it's just me, the cameras, or the HDMI cables, but the 4K ATEM is pretty finicky when using HDMI inputs. So instead i'm converting all HDMI signals to SDI using an Atomos H2S which seems to never drop out on the ATEM, and i'm able to do super long runs over 100 feet. Sometimes we'll use send video wirelessly, but that could bring a new set of worries like battery power for your Wireless Transmitter, Interfererence, etc. When possible we'd rather run long cables. 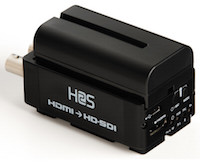 There are much simpler solutions out there (and cheaper). One system i've been keeping my eye on is the Cerevo LiveWedge. This looks fantastically simple to use and should be great for a majority of Multi-Cam Live Streamering projects, but it does have it's limits when compared the ATEM for example HDMI inputs only. This may or may not limit the distance you can position a camera. But it does have a built in scaler which means you can use mixed framerates and won't have the same issues as the 4K ATEM. 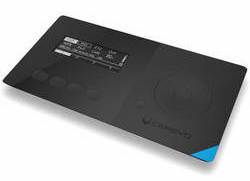 Anyways, this is the setup i've managed to cobble together with the BlackMagic Design 4K ATEM when live switching Multi-cameras during a Live Internet Stream. Again, it's certainly not elegant and there may be better configurations out there. If you've got questions or comments, let me know.

This video was shared in the comments, but I wanted to post it up here as I think this is a great option too for the same price as the LiveWedge.