Rokinon has already released a few new Cine Lenses for larger DSLR cameras, but are soon to release a new line of Cine Lenses for smaller Sony E-Mount mirrorless systems. The Cine lenses have the same optics as their standard counterparts, but differ with built in lens gears for follow focus systems, a de-clicked aperture, and relocated markings.

Great timing on this release to match up with some of Sony's new camera releases such as the new Sony NEX-6, Sony NEX-5R, and VG900 which supports E-mount lens compatibility. Like previous Rokinon Cine Lenses, the new E-Mount Cine lenses will be available in 8mm, 14mm, 24mm, 35mm, and 85mm and are available for pre-order via B&H (click here) 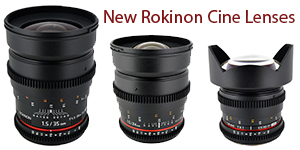