Not sure if you'll find much, but the Sandisk Media sale ends today so you might want to give it another look through. When the price is right, i'll choose Sandisk over Transcend media, but for the most I can live off of Transcend retail prices when i'm in need of new cards. The only thing I see of interest for sale today is the Sandisk 128GB SDXC Class 10.

I currently have a Lexar 128GB SDXC card that i've been throwing in all of my point and shoot cameras, as well as all my DSLR cameras. The new Canon 5D Mark III also accepts SDXC media and we've done quite a few shoots with just the 128GB with no issues. I also use this SDXC card as my portable external drive. If for some reason you need a card this large, the Sandisk 128GB SDXC is cheaper than the Lexar 128GB in today's sale. Check it out at B&H (click here). 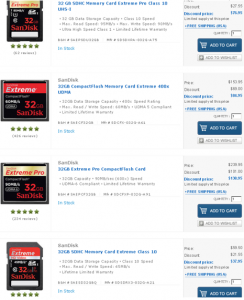 Not long ago Lexar released a 128GB SDXC media card (I have this card) for under $200 dollars. Currently I use this card as my featherweight external hard drive, doubling the hard drive space available in my Macbook Air. SDXC is a backwards compatible format to work in cameras that use average SDHC, but does not suffer from the 4GB file limit (your camera must also support this). Yes, it does work in every camera i've thrown it into including the Sony HX9V, Fuji X10, Canon S100, T2i, 60D, etc. Although each of these cameras still bottleneck with their own firmware limiting file recording. 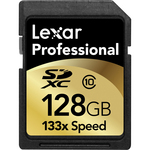 Recently released is the new Sandisk 64GB SDXC media card and at first glance you'd think the Lexar was a better deal when it comes to Size/Price ratio, but the new Sandisk is Speed-Rated to UHS Class 1 standard spec'd out at 95MB/s Read/90MB/s Write Speeds, while Lexar's SDXC is still rated as SDHC Class 10 133x 20MB/s Read Transfer. Might be overkill for DSLR shooters, but big Video camera shooters can take advantage of these larger and faster SDXC cards. The new Sandisk 64GB SDXC cards are already available via B&H (click here) 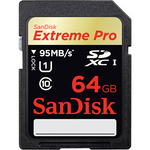