In my office i've got a pretty sweet 80TB Synology RAID NAS setup for editing videos. But with COVID here i'm working from home mostly (to tend to my kids who have no school). Editing at home from a laptop I'm quickly finding myself in need of an extra portable hard drive.

My requirements for a small drive are 6TB+ with at least Type C USB. I don't need lightning fast SSDs for the projects i'm working on with my laptop, and space is more important than speed. After comparing a few different drives, I happened upon this Oyen Digital 10TB Mini Raid (hardware RAID, not software) - which I ended up purchasing.

The Oyen Digital drive can be selected to run on bus power, or through an AC adapter (included), and can also be configured for JBOD, RAID 0, RAID 1, & big mode - No software required. The flexibility for TypeC USB means that I can use it with my newer laptop, or adapt it to work with the older USB on my Mac Pro (trashcan) desktop computer. They are available in various sizes, and even SSD Versions if you're truly in need of speed.

There are physically two disks internally, and when set to JBOD will show the drive as just 1 large disk (maximum space). Using RAID 0 will give you the fastest write speeds as it writes to both drives at the same time - if you need speed. Configure it as RAID 1 and it will be slower on write speeds, but should one drive fail, your data can still be recovered from the second drive. RAID 1 does mean that you'll lose half the capacity because of the redundancy. So there's plenty of options depending on your needs.

I'm guessing for the price, the internal drives aren't something to brag about, but for the total space and hardware RAID features, it's not bad. These Oyen Digital mini RAID drives have been available for a while, has almost full 5 star reviews (at time of this writing). It looks good so far, but obviously I have to through some projects. 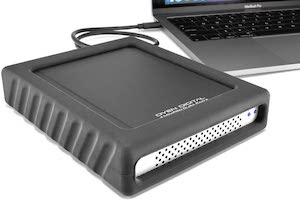 If you haven't heard of the Oyen Digital brand, they've been around for quite a while, and early models supported external storage for XBOX and Playstation consoles. But they also have a line of large RAID enclosures such as this 70TB model on B&H. If you don't need the rugged casing, they also have desktop versions with hardware RAID options.