I'm prepping for my trip to NAB, but I thought I could squeeze in this quick test of the new Aputure DEC LensRegain vs the Metabones Speedbooster S Version. Both of these adapters offer a wider field of view when used with smaller sensor cameras (i.e. Micro Four-Thirds cameras or Sony E-Mount). Since they concentrate more light to your sensor, all of your lenses will end up having faster apertures as well. For instance my Canon EF 100mm F/2.8L Macro

shows as an F/2.0 when using the DEC LensRegain.

The test was using a GH4 and an 85mm XEEN Cinema Prime shot in 4K. As you can see the Metabones Speedbooster 'S' Version achieves a wider field of view over the DEC LensRegain. But the adapter is about $650 US Dollars (here). I'm not exactly sure, but the Aputure DEC LensRegain may list for around $500. 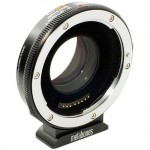 Besides the slight difference in field of view, the Aputure DEC LensRegain in my opinion performed very well. Lines look straight, image seemed sharp from middle to corners. There's a good number of cheap focal reducers on the market that can't seem to get the optics right. I can't say it's any better than the Metabones Speedbooster S Version, but I can say that the DEC LensRegain performed far better than some cheap adapters i've tried.

And while certainly cheaper than a Metabones adapter, it does have a trick up it's sleeve. The DEC LensRegain is actually a wireless follow focus system for Canon EF Lenses too. And If you've never heard about the DEC Lens Adapters, take a look at this video I made from the original (non focal reducer) version.

After using it for a while (and after the NABShow) i'll do an official review of the DEC LensRegain, but if this was something you were already looking for and were just waiting for some samples, I can say the optics itself look really good. 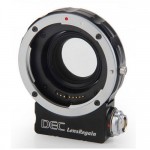