Hanging with the GearAddix team at a recent visit to PhotoPlus NY 2013, we stopped by the Mastor Tech booth who was showcasing an entire line of motorized gimbal video stabilizers.

The largest Pronghorn PN1 3-Axis version includes joystick controls built into the handle for both Pan/Tilt for single operator mode, or can be used with a second operator controlling the system through an RC Remote.

Three smaller 2-Axis hand held versions ( Sailfish SF1, Greyhound GR-1, and Cheetah CH1 ) all include a joystick for Tilt control (panning done by hand). The smaller versions offered are for the GoPro Hero cameras, Mobile Phones, and for cameras such as the RX100 or similar sized Point-n-Shoot cameras. A LiPo battery built into the handle can be recharged via USB and powers the units for up to 2 hours.

Needless to say Mastor Tech was one of the more popular booth at PhotoPlus NY 2013, so it was difficult to nail down a solid interview. Although we may see more of these coming to market, what was most appealing was the build quality and performance. There are no exposed wires or controller boards, and we would swap various cell phones and digital cameras on the systems and it balanced very quickly. This seems like a very polished finished product for the end-user, but possibly because they already have experience with designing aerial gimbal products.

These products won't be available until 2014 so stay tuned. For now, I would love to hear any questions or comments about what you think of this new product? 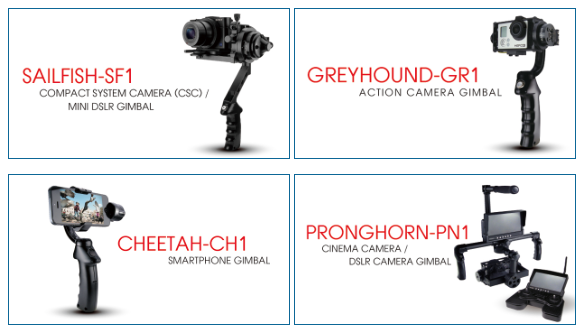