If you've ever had a chance to work with a medium to large size Gimbal Stabilizer, you'll know how difficult it could be shooting for more than a few minutes holding the camera at eye level. About one year ago, I presented a basic idea for a DIY Gimbal Support Backpack (read my article here) that could help operators carry the heavy load more comfortably.

Over the past year, there have been many iterations of this idea, and here's the latest (most detailed) build from Rik at RunPlayBack.com. There's so much information presented in the video and in the written article, that I recommend visiting the link for a step by step build process: https://runplayback.com/build-a-diy-gimbal-support-stabilizer-for-under-100. 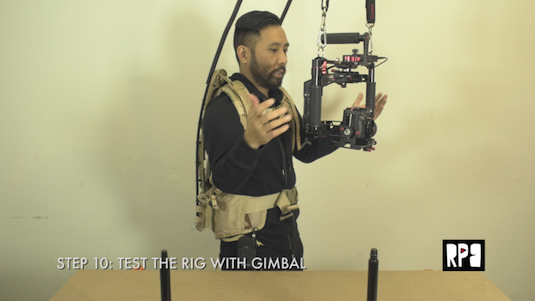 Just an idea we threw together for a 4th Axis stabilizer that could dampen the 'Up/Down' movement from a gimbal when walking. Using 3D printed parts, the oil filled coil over shocks dampen both up and down movements. An inverted gimbal sits above the cheese plate and the operator holds the stabilizer using the outside handles.

For those who can't seem to stabilize 'up down' movement when walking with a #gimbal, we conceived this 4th Axis Stabilizer that sits under an inverted gimbal. 3D printing is awesome when you have ideas you are dying to try. From sketch to working prototype in less than 2 days.... #diy #cheesycam #4thaxis #gimbal #stabilizer

The current setup with spring rating and oil viscosity currently can dampen around 5lbs. This can be changed by using different springs, adding spring clips, and or changing oil viscosity in the shocks. If you look very carefully, the design inspiration comes from a double wishbone-like upper and lower control arms found on sports cars (in this case large scale RC cars).

Some of you who follow know that i've been mounting my GoPro on one of my RC Cars, and I was truly surprised at how much movement could be dampened from this type of suspension.

Samples from my #GoPro #hero4 and Z1 Rider #Gimbal mounted to my RC Truck...Fun! Getting something ready for #SEMA #LasVegas2015. Just need to add my #RadianPro Wireless HD Video system to stream back to a monitor...

It's already been proven that this type of suspension works to dampen movement even with large gimbals, as it's already in use with RC Gimbal Cars such as the FreeFly Tero RC Gimbal Car. We basically took the same idea and designed it into a handheld system. 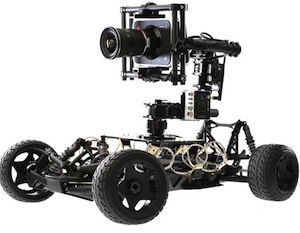 Just for fun we wanted to see this idea in action, so we 3D printed all the parts and made this little prototype. In two days we went from sketch to prototype. We'll keep experimenting with this idea trying to tweak it and make a final metal version, but it would be interesting to see if this simple design is evolved by other people or companies in the near future.