Ben Edwards has put together a 'Rough' guide to DSLRs. If you're just starting out or are curious about shooting video with DSLRs, there's plenty of 'disadvantages'. Of course the many 'advantages' of shooting DSLR video outweigh, so it's been a growing trend. Tidbits of information over at the jump. [Thanks Ben] 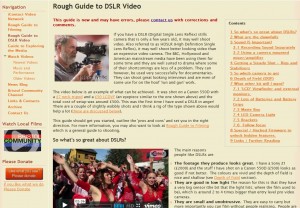