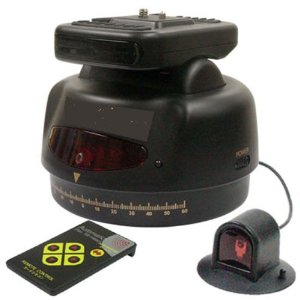 Here's an interesting product that was linked to from Venga. The idea was to use it on the Pico Flex Dolly. What you see above is an inexpensive motorized Pan / Tilt head with wireless remote. Previous popular inexpensive motorized pan heads were from Bescor, but this is a new version from Polaroid which says it's designed to support a full SLR camera up to 7lbs. That's quite a bit. It looks like it's using infrared for it's wireless remote, but says it comes with a 20ft sensor cord + another 20ft extension cord, so no worries about line of sight. Can be powered with (5) AA batteries or DC in. Could be a fun addition to some DIY projects out there. Anyone try this out yet? I'm thinking GoPro HD camera, or maybe my Sony HX9V mounted outside a car with controlled pan / tilt...

While the Bescor Motorized heads ran over $130-200 dollars

, these Polaroid Motorized heads are listing for about $94 dollars on eBay (check prices here)

Over on Amazon, the same Polaroid motorized Pan / Tilt head for SLR cameras runs just over $64 dollars and ships free for Prime members.

[Update] Thanks to Steven for writing in. There may be an even cheaper price, but only a few in stock (Click Here)
for Polaroid Wireless Motorized Pan Tilt Head