I'm a Microsoft guy and work on a PC probably 99% of the time. As i'm typing this i'm working on a Lenovo X300, a PC system that was the rival against Apple's first Macbook Air. This PC laptop is super thin, super light, and runs everything I need for mobile computing. For processor intensive and graphics work, that's all done on a home desktop system. Sure I own an Apple iPad and an iPhone, but neither one gave me the needs required for backing up photos from a shoot, editing a quick video clip, or posting up a new blog post when i'm travelling. This PC laptop running Windows 7 and an SSD hard drive is my go to system when i'm on the go.

Now comes Apple's new Macbook Air at a cheaper price than it's earlier version, and also smaller and lighter. Specs looks like it's got a lot more performance features added too. Running all solid state flash storage, and a ton of batteries all built into the unit, this thing can be on stand by for 30 days without a charge. I would say more than half the system board area was reserved for the batteries alone. Unlike the iPad that fit some needs, and failed in others, this new Macbook Air runs a full Mac OS and has a full QWERTY keyboard. With it's flash based storage system, it's instant on just as fast as the Apple iPad.

There's a discussion about an article over at the B&H Photo website that this new Macbook Air netbook is something Photographers and Videographers could find handy. Many of the new cameras are using SDHC media, only the 13" Macbook Air has a built in SD card reader for backing up photos without a card reader. They also claim that it should run Final Cut Pro - maybe not fast, but well enough. It's available now in both 11" and 13" models, with options from a 64GB to 256GB internal flash storage. Looks like only 2x USB ports are available for external devices, and nothing about Firewire being mentioned. What do you guys think? Anything interesting here at this price? The laptops aren't designed to replace true work systems, but does this suit the Mobile Media market? 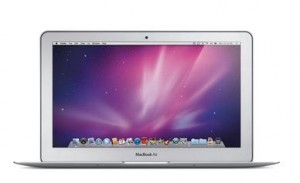 13 thoughts on “New Apple MacBook Air – for Photographers and Video?”