Your basic Jib / Crane will give you smooth vertical (up/down) movements. With a pan head placed under the crane, you will combine both horizontal (left/right) and vertical movements. Attach a video head to the end of the crane and you'll be able to maintain a subject in frame even when the crane is panning horizontally similar to a track dolly or slider. That's quite a bit of options for a crane, but once you've added a motorized pan/tilt head, it will open up amazing camera movements that are otherwise impossible to achieve through any other tool.

Last week we decided to mount up the Servo City MPT1100-SS Pan & Tilt System to one of our jibs. We were able to capture smooth overhead rotating shots down to low tilt movements. The speed of the motorized Pan/Tilt system can be adjusted through the joystick, and the rotation of the motors can be reversed to the joystick movements to suit your preference. The unit can be mounted right side up, or underslung (which I prefer). It can mount to jibs with a bowl adapter or standard 1/4-20 mounts.

We will be using this new setup for an upcoming project, but as with any tool it does take quite a bit of practice. The MT1100-SS is much smoother than it appears in our first practice video (above). The system weighs only 2 pounds and can support up to a 6 pound payload. For around $649 the kit comes with everything you need to start performing motorized Pan / Tilt movements on your jib and more information about this head can be found at the ServoCity.com MPT1100-SS Pan & Tilt system over at the product page (Click Here). 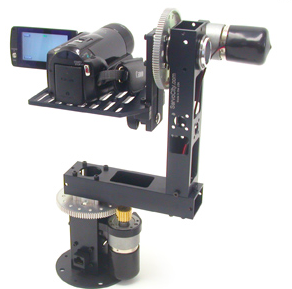 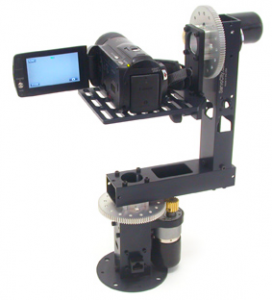 For jibs smaller than 4ft. I don't really suggest adding an entire motorized pan/tilt setup. You will probably get best results working with at least an 8ft. or longer jib setup. For larger heavier camera equipment, you will need a stronger system than the MPT-1100SS and instead look towards the PT-2100 (found here). There is also a good number of long jib/cranes available and a small variety of motorized pan/tilt products available via eBay (click here). 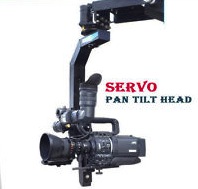 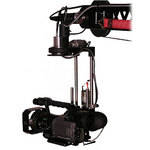