The Canon LP-E6 batteries were designed to fit inside of Canon DSLR cameras, so they don't really come in larger capacities. Sony batteries on the other hand come in a variety of capacities if you want extra run time. Well I wanted extra run time on the new BlackMagic Design Cinema Camera but didn't want to use the ugly and huge break out cables that is required for running external power.

Now I don't recommend this for people who don't really know what they're doing when it comes to batteries and soldering, but if you have the basic knowledge this little MOD can give you extra run time on your new BlackMagic Design Micro Cinema Camera. The dummy battery and Sony Battery Plate are very basic and once you open them up, they just have two wires inside (red + black).

Once you merge those two plates together, you have a working adapter that sends the 7.4V voltage from your Sony NPF-970 battery to a Canon mount. Now Sony batteries come in different capacities so I don't necessarily have to use the bulky one in the video, but it's a good idea how much power I can run if I really wanted to. 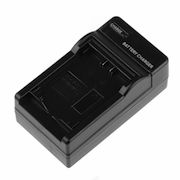 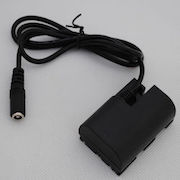 Before I merged my two parts together, I added some heavy epoxy putty on the inside to make it more solid. I also plastic welded (melted the two parts together) along the sides. It's a pretty solid adapter and the wires are glued inside so they don't move. Now I like to experiment, but if you guys decide to try this out, just know you're doing this at your own risk...