I've had a few inquiries about possible new LCD View Finders a.k.a Loupes for the new Canon 5D Mark III. I'm still not able to release much information, or full images, but here's some teaser images of one. I received this prototype LCD Viewfinder recently which aligns perfectly to pretty much most of my cameras as well as the new 5DM3.

One thing to mention is that the LCD Screen on the back of the 5D Mark III is just a bit wider than this new ViewFinder (soon to be released) but there's barely a crop. The special bracket designed on this new LCD Viewfinder moves forward / back / left / right / up / down, which allows it to align to a variety of different camera bodies such as the new T4i, 7D, 60D, 5D Mark II & Mark III, Nikon, and more. 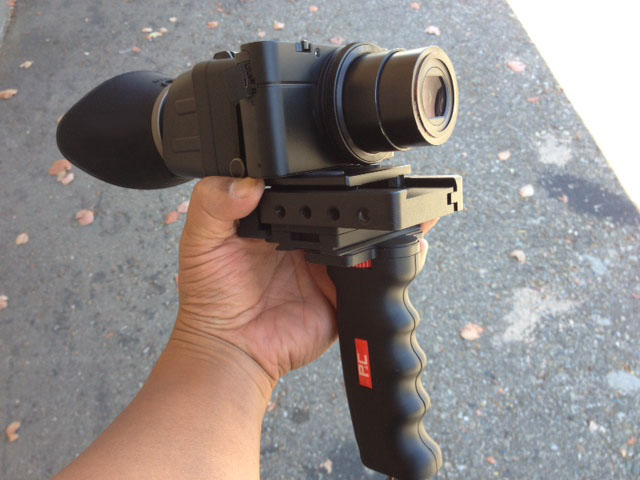 To show the flexibility, here i'm have it mounted with the new Sony RX100 camera (not directly). First I have the Sony RX100 mounted to a P&C Custom 717 Quick Release adapter so I can pull the camera off the entire rig quickly. The 717 Custom Plate also gives additional 1/4-20 threaded mounts (seen on right side) if I wanted to add a friction arm with LED light, Audio Recorder, Microphone, etc.

This new prototype viewfinder is mounted underneath the Custom 717 plate. Finally I have the P&C Pistol Grip mounted under the entire setup for easy handling and there's still a 1/4-20 threaded insert under the handle for an additional Friction arm. With the LCD ViewFinder attached, this gives me an additional point of contact for stabilization, and allows me to shoot in broad daylight. 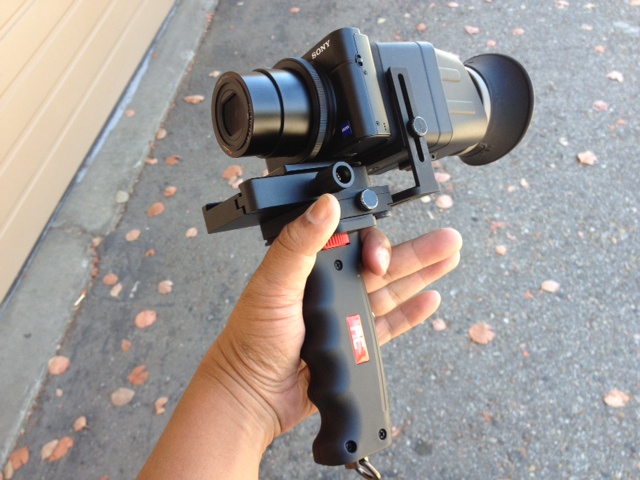 Could this be the Meanest RX100 Rig so far, or the Silliest? Yeah i'll go with the Silliest...

Some notes about this new Viewfinder not seen in the images. It folds up, so if you don't need the ViewFinder you can open it up into a sun shade. It's also designed with a quick release baseplate system. The entire ViewFinder can detach from this little rig by unlocking the knob on the left side (under the 717 QR knob). It has a Glass optical element, and built in Diopter. There's a few more snazzy features but I think I said too much... More to come later about the new ViewFinder so Follow me on Twitter.