The reason why these Seiki 4K Displays are so cheap is that they are just stripped down to bare bones. You won't find a tuner, or a set of quality speakers. There's no fancy aluminum housing with a coated glass screen. You won't find a Smart WiFi interface with Netflix, YouTube, or Hulu. It's simply a display, but for the price - a damn good display!

While i'm not quite ready to start editing 4K videos, or watch 4K content, the MacBook Pro Retina (I have the old version) is able to utilize the full 4K resolution of 3840 x 2160. I'm currently running an external Thunderbolt Display as my main monitor, but as I was looking for a second display, I decided to try this 39" 4K model. The colors are amazing, fonts are sharp, and images look great. I would not advise this to be a primary monitor for creative graphics use, but definitely a worthy addition as a secondary display. 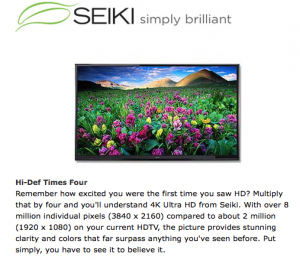 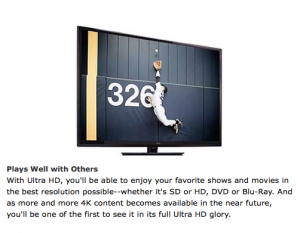 My system can only support a 30hz refresh rate at full 4K, but considering this is my secondary display for static content it's not a big deal. Seiki also offers a 50" inch 4K Television (found here), but would be just too big as a monitor.

. That's an amazing price for a 4K television today, but right now they are on sale for just $480! (found here).