Thanks to a tip from Mark, today's Daily Deal in the Electronics category is a Canon T3 bundle that includes (2) lenses, Camera carrying case, and basic cleaning kit

. Not the greatest deal if you don't need or want the extras. This is the Canon T3 (not to be confused with T3i) which has a few limitations in the Video area, but is great for budding photographers who want to start in Canon's DSLR line. Definitely check out the site, scroll down a bit and see hundreds of other deals from different categories below. [Thanks Mark] 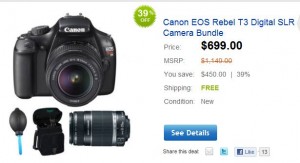 which features a variety of items (including digital cameras at times), which run several deals throughout the day. The Amazon listings only run for a few hours and are limited quantities.